How big is the Decorah Bald eagle nest?

Our moderators are often asked about the size and weight of the nest. The short (and very rough) answer? The nest is roughly 5 feet high by 6 feet wide at the bowl, and weighs about 1367 pounds.
This should give you about the right idea of its size, if not its shape.

So how do you know that?
We haven't measured or weighed the nest, but I can do some rough back-of-the envelope calculations that should come close. We are going to pretend that the nest is a neat cone shape, if only because it is closer to cone-shaped than to anything else. This photograph of Bob lying down in the nest was taken two or three years ago. 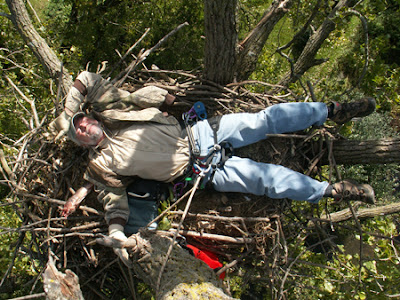 Earlier today, I gave 2212 pounds as the final weight. Wrong! It was pointed out to me that the nest is not a cone of solid wood - the branches are woven together and it has spaces, albeit tightly packed ones. I cast around a bit for a way to determine this unmeasurable space and finally decided to use the fibonacci ratio of 61.8%. This number, which is also referred to as the golden ratio, or the golden mean, turns up quite a bit in natural series, especially ones that involve spirals. Don't believe me? Check this out: http://science.howstuffworks.com/environmental/life/evolution/fibonacci-nature1.htm

Once I factored in fibonacci, my final estimate becomes 1367 pounds. Still a creepy thing to think about when you are dangling 50 feet above the ground on a rope attached to cottonwood limbs above the nest.

How big are Mom and Dad?
We don't know for sure, since we haven't captured and measured them, but we estimate about 8-9 pounds for Dad and 11-12 pounds for Mom. Their wingspan is most likely between 6.5 and 7 feet.

So how do you know that?

Again, we don't know exactly. Bald eagles vary in size. Bald eagles in Florida are much smaller than those in Alaska, probably because being large helps animals retain heat in cold weather (check out Bergmann's rule: http://en.wikipedia.org/wiki/Bergmann%27s_rule). Iowa has cold winters, so our eagles should be on the larger end of the scale. According to wikipedia (http://en.wikipedia.org/wiki/Bald_Eagle):
Kay Neumann from SOAR (Save Our Avian Resources) has a lot of experience weighing and measuring bald eagles that come into her rehabilitation center. Although these eagles are often sick or injured, and so may be a little lighter than a healthier eagle, she said:

"Males are weighing in the 8 to 9 pound range, and females are in the ten and eleven pound range. I’ve heard the Raptor Center (Amy's note: the Raptor Center at the University of MN) say from 8 to 12 pounds, and that seems about right for our Iowa birds too. The record holder is a 14 pound female, but she may have been a Canadian bird. So there is quite a bit of a range – just like people, eagles come in different sizes.
It is a bit deceiving in that they look as big as a turkey – 20 pound birds. Turkeys are designed to wander around on the ground and look for seeds while eagles are designed to fly and so built quite differently. An eagle has hollow bones and feathers for strong but light construction - just like a plane."

How big are the eggs?
The eagle eggs are oval, white, and roughly the size of a tennis ball. The Center for Conservation Biology at the College of William and Mary has a wonderful post on this:
http://eaglenest.blogs.wm.edu/2011/03/04/what-size-are-bald-eagle-eggs/
Bald eagle eggs weigh about 4.2 - 4.5 ounces (120-130 grams) and range from 2.3 to 3.14 inches (6-8 centimeters). They are 1.96 to 2.3 inches (5-6 centimeters) wide. They are hard-shelled. Everyone knows that eggs can't get too cold, but they also can't get too hot. Cam watchers have noticed the eagles seeming to spend a little more time off the eggs this year. This may be in response to the (relatively) warm winter. For more about the eggs, check out this blog: http://raptorresource.blogspot.com/2012/02/we-have-first-decorah-eagle-egg-of-2012.html

The internet gives a lot of interesting answers when about bald eagles and prey weight. I think the Carolina Raptor Center gives the best answer: they can lift half of their weight and carry 1/3 of their weight. Based on these estimates:
These estimates are in line with the prey we have seen brought into the nest, which has included: 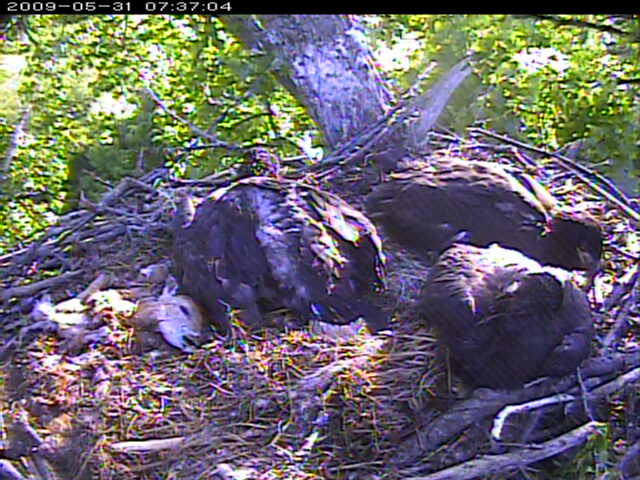 Having said that, I don't think I will ever forget this capture, taken in 2009. One of the adults (probably Mom) brought in the head of a dead fawn (young deer). A newly born fawn might be just inside the range of an eagle's carrying capacity (3 to 5 pounds), but we think the deer was most likely road kill, especially given how deteriorated its body appears to be.

Click here for a look at the area around the eagles nest.

Resources that helped me write this: