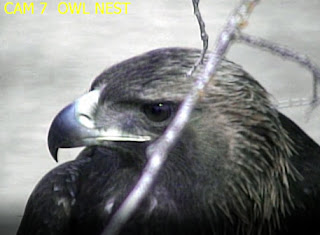 Eaglecrest's nesting golden eagles normally appear only at a distance. But on August 31, an immature eagle decided to show up in camera range. Viewers were treated to amazing views of the eagle's golden feathers, large talons, nictitating eyelids, and overall plumage. Video highlights can be found here:


Golden eagles get their name from the golden or tawny wash of feathers on their head and neck feathers. Adult American gold eagles are otherwise dark (or chocolate) brown in plumage, with 'marbled' flight feathers on their wing and tail. They range from 26 to 40 inches in length. Overall size is a complicated issue - while American gold eagles tend to be smaller than their counterparts in Eurasia, the largest gold eagle ever recorded was a female banded and released in Wyoming in 2006. Although bald eagles are a little bit longer on average than golden eagles (34 inches in length versus 33 inches in length), the difference is small enough that some golden eagles will be longer than some bald eagles. Confusing the issue even further, golden eagles (unlike bald eagles) don't appear to follow Bergmann's rule: one study found that golden eagles in Idaho were larger than those from Alaska. We can confidently say that they have a larger wingspan than bald eagles: North American golden eagle wingspans range from 6 feet to 7.2 feet according to Animal Diversity Web.

Look at that face! The nictitating membrane found in all birds is clearly visible. This membrane protects and moistens a bird's eye while allowing it to see. It also helps protect the young eagle's eye from scratches administered by struggling prey animals. The golden eagle lacks the baffles or 'jet cones' in a peregrine's nose, probably because golden eagles don't dive as fast as falcons do. Golden eagles achieve speeds of 28-32 miles per hour in an unhurried soaring flight, although they can achieve 120 miles per hour in a fast glide, and 150 miles per hour in a stoop. Its curved beak has sharp cutting edges for tearing meat, but lacks a falcon's tomial tooth. The tomial tooth, a small projection on the outer edge of the upper mandible, allows falcons to bite through cervical vertebrae and sever the spinal column of prey, quickly dispatching it. Golden eagles, however, deal death with their talons.

Check those legs and talons out! Unlike bald eagles, adult golden eagles are 'booted' - that is, their feathers cover their entire legs down to the toes. This may help protect their legs from bites and scratches inflicted by struggling prey. Golden eagles eat more kinds of prey than I can list here, since over 400 vertebrate species have been recorded as golden eagle prey. Although golden eagles appear to have food preferences, they are highly opportunistic hunters that will predate most reasonably-sized animals. They aren't going to wait for rabbits if ground squirrels are available!

The long, powerful talons of the golden eagle make escape extremely unlikely once prey is contacted. They can be up to three inches long and exert approximately 440 pounds per square inch of pressure. Small prey might be crushed, while larger prey might die from blood loss, shock, or collapse of the lungs following multiple punctures. Although the argument about how much weight golden eagles can carry rages on (Teenagers! Whole cows! Adult wolves!), the general consensus among people who study golden eagles is that prey much over 4.5 pounds would need highly favorable wind conditions for lift. So if a large golden eagle had plenty of momentum, and if the wind was right, and if it was able to swoop down and catch prey in its talons without stalling out, it might be able to lift more. But how much more is a matter of debate. Very large prey is simply eaten in place.

With their short, wide tails and long, broad wings, golden eagles are built to soar. They cock their wings in a slight 'V', somewhat like turkey vultures, and hold their wing tips wide open, flapping only when necessary. Unsurprisingly, they prefer open country and like to nest up high. Jumping off something high to attain lift is much less work than dead-lifting from the ground and height may, in some cases, make it easier to get prey to the nest. At Eaglecrest, the resident golden eagles nest in a large tree. Their large stick nest (smaller than a bald eagle's nest, on average, but still pretty large) is lined with grass and other soft vegetation when in use.

Golden eagles are territorial. Given that this was a juvenile (its feet were not fully booted, it reveals a flash of white at the base of its tail when flying, and it has a lot of white patches), it was most likely a 2013 fledgling that hadn't yet dispersed. Like bald eagles, golden eagles appear to disperse from the natal sites, wander (fairly) widely, and return to their natal region, if not nest, as they approach maturity. I hope our young golden eagle will survive to adulthood and return to contribute yet more magnificent golden eagles to the area. What a wonderful sight to see!

Things that helped me write about this topic: