Martin Luther King Day got me thinking about African-American people in conservation and environmentalism. The three people below represent a very small proportion of Americans with African heritage involved in conservation and environmental issues. There were a lot of potential choices, but I chose Dr. Robert Bullard and Rue Mapp because I thought their work reflects Dr. King's legacy of justice and equality (plus I love Mapp's business), while John James Audubon was a surprise and delight to me.

Dr. Robert Bullard, Father of Environmental Justice
Born in 1946, Dr. Bullard began his work in Houston, Texas in the late 1970s. An environmental sociologist, Dr. Bullard identified the siting of garbage dumps in black neighborhoods as part of a wider systematic pattern of injustice. Dumping in Dixie, a book he wrote about his work, is regarded as the first to fully articulate the concept of environmental justice, beginning with the premise that all Americans have a basic right to live in a healthy environment. He has authored eighteen books in total that address sustainable development, environmental racism, urban land use, industrial facility siting, community reinvestment, housing, transportation, climate justice, emergency response, smart growth, and regional equity.

Rue Mapp, Entrepreneur and Outdoor Enthusiast
Rue Mapp grew up in Oakland, California, but loved to spend time on her family's ranch north of Napa, where she hunted, fished, biked, and spent hours exploring the woods. In 2009, she rejected the path of business school to begin Outdoor Afro, a business reconnecting African-Americans with the outdoors. The business grew in part from Mapp’s dismay at finding herself among relatively few people of color who embraced the great outdoors. “I didn’t see enough people who looked like me. There was a huge number of people missing out.”

Outdoor Afro currently has 30 trained leaders and over 7,000 active members. Mapp's volunteers lead hiking, climbing, rafting, and camping trips, connecting participants with black history and nature on each one. For now, she is working hard to reconnect people of color to bigger outdoor spaces. But in twenty years, she is “...hoping we’ll be able to go out and experience nature, and it’s no big deal.”

Rue Mapp is leading the way in getting people outdoors while helping us understand that outdoor spaces and experiences are for everyone.

John James Audubon
I suspect most readers will be as surprised by this as I was. John James Audubon, famous wildlife artist and the inspiration behind the National Audubon Society, was born in 1785 in Haiti (then called Saint Domingue), the illegitimate multi-racial son of Jean Audubon, a French sea captain, and Jeanne Rabin, a black Creole slave woman from the Congo who was Audobon senior's chambermaid and mistress. While not all accounts of his parentage use the word 'black' or 'african', Creole is defined as a person of mixed European and black descent, especially in the Caribbean. Audubon is famous for his illustrations in "Birds of America", an anthology of more than 435 species. He also expressed concern about the destruction of birds and their habitats in his later writings and is credited with conducting the first bird banding experiment on the North American continent, which makes him the father of bird banding in the US and Canada.

The Raptor Resource Project is proud to be part of his legacy.


I really enjoyed researching this blog and hope to introduce readers to more conservation heroes this year, including some more favorites of those of us involved with the Raptor Resource Project.

Tech Note: Facebook issues, streaming problems, and other things that go bump on your device!

It's only a little over a month before the Decorah Eagles usually start laying eggs, so it seems like a good time to blog about some technical issues and solutions before the season gets going! 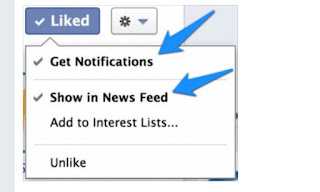 I followed you on Facebook, but I'm not getting your notifications and posts...
We're hearing from Facebook fans whose news feed is not showing our Facebook page, even though they liked it. Make sure per the image at right that you are signed up to receive notifications in your newsfeed. If you are, comment on one of our threads - even with just one word! - and we'll be back in your news feed. Keep commenting and sharing pictures and posts to keep seeing us. Facebook algorithms no longer show content that people don't interact with, as documented here: http://bit.ly/1JLx5D5 and here: http://slate.me/1ReLjWx. Of course, the articles don't talk about Facebook's dirty little secret - bots that pretend to be real people. Limiting your news feed to things you are interested makes your feed more rewarding and reduces your changes of interacting with a bot that scams you, gives you malware, or locks up your hard drive.

This SUPER-ANNOYING Facebook pop-up won't let me see your page unless I have a Facebook page too! It didn't used to be that way...
The all-caps annoyed person is me. I am ALL-CAPS ANNOYED that Facebook is spamming people with a register screen if they aren't logged into Facebook. This is a new thing and not something we have control over, although we did file a ticket with Facebook to complain (in a polite non-caps way). We are a business page and as such are supposed to be available to the public, Facebook or not.

To block the pop-up, add adblockplus to your browser if you don't already have it. Ad-block currently has a version for all of the big browsers used on standard Macs and PCs. Add these two lines to your filter:
Don't know how to add filters? Check this tutorial out: https://adblockplus.org/getting_started#add-subscription. This will not remove the option to register or login at the top of the page, but it will stop the pop-up from covering the page.

If you aren't interested in blocking the pop-up, you can reduce it. Try pressing the escape key when it pops up. If it doesn't go away, click the x on the right-hand side to reduce it (outlined inside the red circle below). We will also be posting news and video round-ups on our website at www.raptorresource.org.

The 'X' is non-ADA compliant for contrast, which is why it is so hard to see. We made sure to notify Facebook of this problem as well.

I can't see the Decorah Eagles on my desktop computer anymore. What do I do?

If neither of these steps work, you probably have a more complicated problem. Back in 2015, Ustream changed their video player from Flash to HTML5, although the video stream itself is still based on Flash in the desktop environment. On balance, the move towards HTML5 is a very good thing, but it has caused temporary problems for some users, especially those with older browsers or those using firefox.

HTML 5.0 was released in 2014. Those of you with older browsers (for example, AOL Explorer) should still be able to watch the Flash-based stream but will have lost player features like share, embed, and the ability to chose your viewing resolution. I encourage you to upgrade to a newer browser, since you will loose the ability to watch if Ustream makes the jump to an HTML5-based stream. My two favorites are Chrome and Firefox, but any modern browser should work.

I'm not sure why the jump to an HTML 5.0 player seemed to have confused some versions of Firefox so badly. If you are experiencing problems, your browser might be defaulting to Flash not enabled. You will need to manually enable it in order to view streams. Follow this link to find out what you need to do.

Can I watch the Decorah Eagles on my phone, tablet, or iDevice?
You can! I strongly suggest downloading the Ustream app. Go to your device's store, wherever it is located, and search for Ustream. Install the app and start watching!

Ustream is working to improve the device experience, but please be sure to provide feedback (polite, respectful feedback) about any features that are missing.

Why is the stream choppy?

There could be more than one reason for that, but at my house it is usually due to low bandwidth, especially during evenings and weekends. As shown in the image below, the Ustream player allows you to manually select the resolution that best meets your bandwidth. Click the HD button just below the stream to access your options. Drop it down to 360 or even 240p to reduce bandwidth consumption, or throw caution to the wind and see if you can stream at 720p! 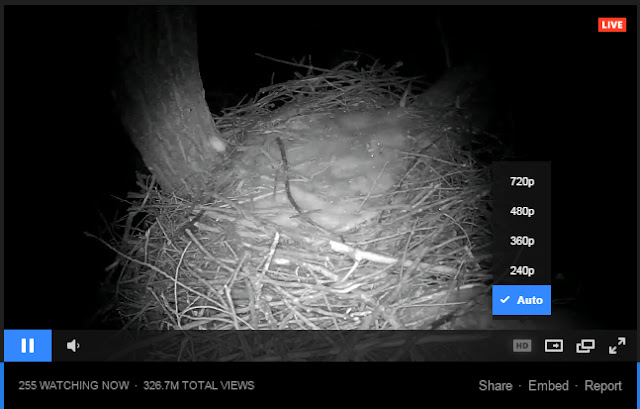 I hate ads! Can I get rid of them?
You can! Ustream runs ads to offset the cost of providing the stream. However, they have an ads-free premium membership option that costs just $3.99 per month. Click here to learn more.

I'm okay with ads overall, but I'm not okay with THAT ad!
Ustream ads are supposed to be family-friendly - they shouldn't contain foul language, sexual content, nudity or near-nudity, and so on. If you see an ad that contains problem content, please let them know (you can let us know, too).  To let Ustream know, file a ticket here. To let us know, email amy@raptorresource.org. Both of us will want to know what time you saw the ad and where you are watching. This will help Ustream trace it down.

We hope you enjoy watching this year! If you have a technical issue you think should be addressed, leave a comment below and we will see what we can do.