We turned on the Decorah eagle cam this morning and questions are rolling in! Here are the answers to the most commonly asked questions so far:

Where are Mom and Dad Decorah nesting?
They are nesting in the new or yonder nest, henceforth to be known as N2. N2 is about 533 feet or 162 meters east of N1, by the side of Trout Creek. It is 60-70 feet up in the center fork or crotch of a cottonwood tree. The image below shows both nests and the trout hatchery.
What is the diameter of N2?
We didn't measure it exactly, but it is smaller than N1. I'd guess about 4 feet in diameter. This yields a circumference and area of about 12.5 feet. Neil and I were just barely both able to fit into it, and we hung all of the equipment of the side with leashes and anchors.

What types of trees did they raid for the railings?
The available kind. Primarily cottonwood, judging from the trees surrounding it. The neighborhood also contains maple and oak, but cottonwood is the predominant tree.

How would you describe the tree trunk joining where N2 is?
N1 was out on a limb, away from the central fork of the tree. N2 sits directly in the tree's center fork or crotch, where the trunk splits to form smaller branches.

How many corn husks were in it when you put up the cams?
None! We installed the cams on August 31. The eagles hadn't yet started fall courtship or nestorations.

Did you leave a food offering when you put up the cams on N2?
We didn't. Fortunately, Mom and Dad didn't mind.

Do the cams bother them? Does the IR light bother them?
The eagles are unable to see IR light. I've got a blog post explaining it here: http://raptorresource.blogspot.com/2012/03/what-is-infrared-light-and-why-cant.html. If you don't want to read the long explanation, you'll notice that the eagles' pupils don't respond to the IR light by contracting or expanding. They can't perceive it and we wouldn't either if the camera wasn't mapping the image down into the visible spectrum for us.

The cam doesn't bother the eagles either: it is fairly small, up above them, and painted drably to stop reflection and glare. The globe is highly smoked enough that I can't see through it. If the eagles can, it is no more alarming to them than anything else - leaves blowing, branches tossing, cloud shadows, squirrels and other animals, and people on the bike path. Their world is filled with movement and sound.

Did you work on N1's cams?  If so, did you see anything that would help speculate on why they left N1?
We didn't go up into the tree - those cams are still running from 2012. We don't know for sure why they left, but there are two theories.
I'm more in favor of one, myself, but I'm not ruling out two. For more speculation, check out this blog post: http://raptorresource.blogspot.com/2012/10/the-decorah-eagles-have-surprised-us.html

How did you get into the tree?
After making sure no eagles were in the area, we fired a crossbow loaded with monofilament line over our target branch. We used that to pull a four mm cord, which was used to pull an 11mm climbing line. Neil used a frog system and I used a grigri + ascender + carabiner. Neil got up into the nest in about a minute. It took me a little longer. Here are two video links that show the basic technique:

Coming down was interesting since Neil's rope wanted to pull him away from the tree. We wrapped webbing behind him and I pulled him into the tree so he could run the cable. This worked extremely well.

How many cams are there?
Two - one PTZ and one fixed cam. The PTZ is a mini PTZ and the fixed cam is also quite small. They are painted drably.

Where are they mounted?
The nest is cradled in the center of the tree. The limb on the south side of the trunk shoots out and up. The cameras are mounted a little over where the limb turns up. I'm guessing they are about four feet above the nest.

What kind of cams?
Despite having helped install the cam, and don't know much about them. Both were purchased from KT&C and the PTZ is a mini-outdoor cam.

How long did it take to install the cams?
Bob had everything ready to go and it went very quickly. It took about three hours from the time Neil started up his rope. We got up, installed the two cams, and rappelled down, fixing the cable as we went.

Did the eagles notice or mind?
They did not. As I wrote earlier, We installed the cams on August 31. The eagles hadn't yet started fall courtship or nestorations. The cams themselves are small and painted drably to minimize reflections or anything else that might disturb the eagles.

Eaglecrest facilitator mochamamma has captured several videos of young red-tailed hawks squabbling, chasing, and stealing food from one another. 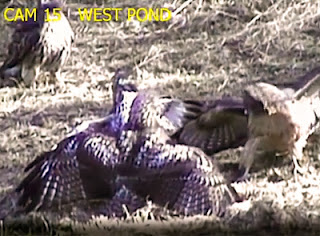 At first we thought they might be nest mates – although Stitch and Spot hatched just one young hawk, there are other nests in the area. But as the hawks piled up – three, four, five, eight – it became increasingly clear they weren’t related. What was going on?

We had a couple of ideas. Eaglecrest’s pond is a hot spot for local wildlife. Well over 30 species of animals have been captured on camera, including reptiles, amphibians, several mammals, and many birds. Large concentrations of raptors have been recorded at watering holes in Africa, Australia, the American Southwest, and other arid places. The young hawks at Eaglecrest were probably drawn in from the surrounding area by the pond’s abundant food and water supplies. But are they competing for limited resources or engaging in play and social interaction? Maybe a bit of both is happening.

I tend to think of red-tailed hawks as fairly solitary creatures. They chose a mate, build a nest, and defend their territory from interlopers, including other red-tailed hawks. But researcher Charles Preston observed red-tailed hawks in winter communal roosts of four to six members. These roosts sometimes included ferruginous hawks and at least one was close to a large communal roost of bald eagles.  Red-tailed hawks will also concentrate in higher numbers based on prey availability, which is probably why I start noticing them in larger numbers mid-fall. Like many other birds, red-tailed hawks are far less territorial when they aren’t breeding, although it might be a stretch to call them social. Yet juvenile red-tailed hawks engage in social play.

Play is well-documented among juvenile red-tailed hawks. They have been observed playing with inanimate objects like rocks and sticks – stalking them on the ground, pouncing on them, and dropping and catching them in flight. Play seems to have evolved in most species that provide prolonged periods of parental care, and red-tailed hawks are no exception. As Charles Preston notes, the young birds “may gradually broaden their range of hunting methods and increase their skills by learning from their parents or other red-tailed hawks.”

The young red-tailed hawks at Eaglecrest chase one another, steal prey, and mock fight. They spread their wings, assume striking poses, mantle food, stalk through the undergrowth, and wrestle, pinning each other down before walking away. It is interesting to speculate that this ‘flocking’ behavior might help the young, inexperienced hunters capture food, even if they risk having it stolen out from under them. More eyes are more likely to find food, especially when the hunters are young and inexperienced. The sheer number of young hawks might help flush prey out, although any successful hunter will need to defend his or her dinner against the rest. Although the pond is a rich environment, the young hawks are still learning to hunt and compete for prey. A little musing: we know the hunting skills they acquire will help them procure food. Will social skills like posturing and wrestling help them acquire mates and defend territory from other red-tailed hawks?

Presumably, our hawks will spend several weeks together honing hunting, social, and other survival skills prior to dispersal (or forced eviction by adult residents). I hope the skills they have acquired through social play will help them survive.

We still don’t know how common this kind of aggregation is, although I intend to do more reading and research in the weeks to come. Is this common outside of hot spots like the Eaglecrest pond? I have no idea. More questions: we have watched young eagles and vultures play, although those birds were pre-fledging. How does pre-fledging play inform post-fledging play? How is play different and alike in different species? Do parents play with young? Why is play so prevalent in juveniles? These are worthy and important questions to ask. Even TED plays attention to the importance of play: http://www.ted.com/talks/stuart_brown_says_play_is_more_than_fun_it_s_vital.html
So get out and play!
Posted by Amy Ries at 2:52 PM