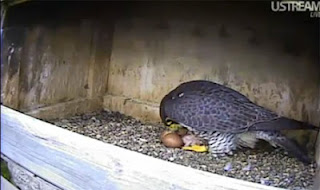 Michelle and Travis hatched two young falcons on 5/13/12, and the questions are already flying! I'll try to answer a few of the most common here.

1. Why are they nesting in gravel? I wish the hatchlings had grass or something softer!
Historically, peregrine falcons nested in two places: on cliffs and in trees. To quote: "Although the peregrine falcon is currently considered a cliff-nester, records indicate that it once nested in tree cavities (Goss 1878, Ridgway 1889, Ganier 1932, Bellrose 1938, Spofford 1942, 1943, 1945, 1947, Peterson 1948). The peregrine still uses cavities in broken-off trunks in Europe (Hickey 1942), but the hole-nesting population of America apparently disappeared with the felling of the great trees on which they depended (Hickey and Anderson 1969)."

Either way, peregrines did not build nests out of branches, twigs, or grasses. Cliff nesting birds use ledges or potholes. These commonly have some kind of substrate: sand, pebbles, dirt, and so on. The male and female dig and wiggle out a scrape, or shallow cavity, into which the female lays her eggs. The substrate provides drainage, cups the eggs, and helps keep them from breaking on the edges of the underlying rock. We use 80 pounds of pea gravel in our nest boxes to simulate a substrate and protect the eggs.

2. How long can the babies go without eating?
The hatchlings consume the egg yolk shortly before hatching, which gives them enough nutrition  for 24 to 48 hours. However, they don't usually have to go very long. Their first feeding was at 11:49am CST this morning.

3. What do falcons eat?  Falcons eat other birds. We've found the remains of pigeons, woodpeckers, coots, finches, blackbirds, ducks, cuckoos, and many other birds stashed in and around nests. In general, the adults catch a bird by diving or stooping on it. If the impact doesn't kill it, the adults use their tomial tooth - a notch in their beaks - to bite through their prey's cervical vertebrae. They pluck their prey prior to eating: "feather falls" have helped me locate Peregrine falcons at the Mayo Clinic and the Dairyland Alma power plant.

Adult peregrine falcons eat about 2 1/2 ounces (70 grams) of food per day. Using a rough back-of-the-envelope calculation, males average 587 grams of weight and females average 1205. So males eat roughly 11% of their body weight each day. I'm guessing - and this is a guess - that females do the same, so Michelle probably eats a little more than Travis does. It has been speculated that  gender-based size differences allow male and female birds of prey to eat from a slightly different prey bases, widening the available food supply.

So based on this calculation, I'd need to eat about 16.5 pounds of food every day to keep up with Michelle.

4. How fast will the babies grow?
Peregrine falcons double their birth weight in 6 days, and are 10 times hatch weight in three weeks.
Like the eaglets, they start with a fluffy white coat of baby down. We'll start to see brown juvenile feathers emerging at about 20 days of age. By 40 days, the young birds will be sleek brown juvenile falcons.

Over the next few weeks, we'll see a lot of eating, sleeping, and pooping. Poop is a great way to locate the nests and perches of many kinds or birds. See bird poop? Look around for the bird!

5. Will Cain and Abel Syndrome be a problem here?I don't want to say 'No', but I haven't seen it at any of the other Peregrine falcon nests we watch. There is an ample food supply and Michelle and Travis are very good at caring for their young.

6. Mom and Dad are talking to the babies!
Yes, they are! We've already heard Michelle echupping encouragingly to her young immediately before their first feeding. We'll also hear the young food begging (which one website describes as 'screea screea screea'), and kakking: an alarm, defense, and 'annoyance' call. Peregrine falcons are  very vocal. I've had unhappy babies set my ears to ringing more than once.

7. Does the nest smell bad?
It depends! Some falcons are great housekeepers, while others (I'm looking at you, Hibbard plant falcons) let prey remains pile up in the nest. If the nest is messy, the young birds smell interesting to human banders - not bad, but not pleasant: a complex, spicy smell.
Things that helped me learn and write about Peregrine falcons: