We talk about weather quite a bit. From wind in the tree to ice and snow on an eagle's back, we watch birds face difficult weather conditions. As our followers know, eagles and peregrine falcons have highly insulative waterproof feathers that protect them from wet, cold weather. However, some birds specialize in getting wet. 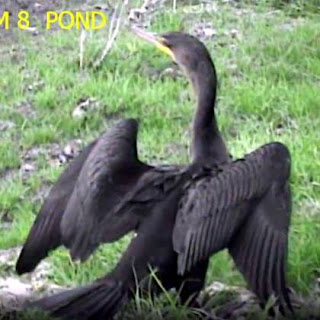 This double-breasted cormorant was caught on camera at Eaglecrest. The cormorant is a marine bird that specializes in eating fish, although it will also sometimes eat insects, amphibians and crustaceans (thank you, Animal Diversity Web and Wikipedia). They generally feed in shallow water (less than 8 meters or 24 feet deep), which may explain why they like Eaglecrest's pond. David McDonald, Eaglecrest's owner, also keeps it well stocked with fish.

Even many waterfowl tend to avoid actually getting wet. Like many birds, ducks and geese have feathers that 'zip' together and trap air, forming a water-resistant coat of sorts. They coat their feathers with oil from their preen glands, further helping repel water. Dabbling ducks (like the mallard and wood ducks at Eaglecrest) spend most of their time on the water's surface, tipping butt-up every once in a while to nibble passing food. Wet feathers would weigh them down, causing them to ride lower in the water. This in turn would lead them to expend more energy while searching for food - a bad trade off all the way around. Dabbling ducks want buoyancy.

But the cormorant has a different hunting strategy. A cormorant's outer feathers are water permeable, which weighs the cormorant down and helps it remain underwater. There is some debate about whether this has to do with feather structure or its preen gland. Some sources claim that cormorants produce less preen oil, aiding feather permeability, while others believe that feather structure plays a more dominant role. Whatever the cause of permeability, dry feathers next to the cormorant's skin trap air. Its unique feathers reduce buoyancy while retaining warmth. For all practical purposes, the cormorant is wearing a sort of home-grown dry suit. Unlike its cousin the Anhinga, which soaks all the way through, cormorants can handle cold water. I've seen them in shallow water on the south side of Lake Superior, near the Apostle Islands, where summer surface water temperatures may not climb much above the mid-sixties - and that is in the warm part of the Big Lake! The cormorant's long tail and cyclical paddling also help reduce buoyancy. All of these things
keep the cormorant underwater longer at a lower metabolic cost, which pays off in more food opportunities and reduced energy loss.

Dabbling ducks spend a lot of time floating on the surface of the water. But once a cormorant has secured dinner, it tends to leave. It is a diver and swimmer, not a leisurely floater. It spreads its wet wings to dry until the next time it goes hunting underwater.

Some cultures fish with trained cormorants. Click here for a video that shows cormorant fishing: http://youtu.be/Me3J0K1Qd5o. Note how much lower they ride in the water even when floating. Scuba divers should check this link out - at least scuba divers that also enjoy reading about birds. This is the first time I've found a reference to Boyle's Law in a bird book. And finally, some people believe that the cormorant's wing spreading may serve social or thermoregulatory purposes as well.

Some more things that helped me learn about this topic:

The American kestrel prefers open areas with short ground vegetation such as grasslands, meadows, fields, and parks. In urbanized areas, they might be seen perched on a pole or wire overlooking open space below them. They feed primarily on small animals, including grasshoppers, mice voles, dragonflies, and small lizards. If you have suitable habitat and would like to install a kestrel nest box, click here for our plans. We'd love to hear from anyone who has installed one of our boxes, so shoot me an email and let me know: ries93@gmail.com.
Last year we began a pilot project to install kestrel nest boxes along rural gravel roads. The American kestrel (Falco sparverius) is a small falcon that is in decline throughout parts of its range. There are a number of theories about the kestrel's decline: HawkWatch International's list of factors includes development and reforestation of preferred habitats, poisoning, and the West Nile virus. We've focused on the loss of grassland in Iowa, where farms have grown larger, woodlots, fencerows, and fallow land have shrunk, and small grains and hayland have been replaced with row-cropped soybeans and corn. The Iowa DNR states:

"Between 1990 and 2010, Iowa lost 2,615 square miles of potential pheasant habitat. This habitat was a mix of small grains, hay land, and Conservation Reserve Program (CRP) acres. To put this loss in perspective, 2,615 square miles is a strip of habitat 9 miles wide that would stretch from Omaha to Davenport!" [2012 Iowa Roadside Survey]

So why use ditches? Bob looks at the ditches and shoulders of rural roads and major highways as voleways. I don't tend to think of farmland as heavily developed, myself - it's all green, right? - but mile after mile of row-cropped corn and soybeans is not a natural environment. As grassland and pothole prairie are converted into farmland, animals and birds are forced into ditches. Water, rodents, insects, and plant life attract a wide variety of larger animals, including deer, rabbits, woodchucks, gophers, mink, muskrats, badgers, fox, raccoon, skunks, snakes, frogs, red-tailed hawks, harriers, kestrels, sparrows, mourning doves, gold finches, bobolinks, and pheasants.

A little back-of-the-envelope calculation. Iowa contains a total of 36,016,640 acres. Over 90%, or 32,414,976 acres, is under till. So how much of what's left is ditch? That's a hard question. The DOT manages about 175,000 acres along interstate and state highways, but that figure doesn't cover county, city, and town roads. When those are added in, the total jumps up to about 1.6 million acres, or 44% of the remaining 3.6 million acres left. Although broken and fragmented, that is a lot of potential habitat with which to create a kestrel habitat.

Last fall, we installed six nest boxes along 310th street in rural Winneshiek County [click here for google map]. We returned this spring to find that two of them were destroyed. One had tipped over and the other had been vandalized. However, four were still standing and three contained kestrels! We clearly needed to add cement to the base of the poles to keep them stabilized, but other than that, the plan worked!

Bob enlisted the help of David Lynch and his wife Anne to add concrete to the base of the poles and we returned a week or so later to band kestrels. Unfortunately, we weren't able to band - in two of the three nests, the babies were too young, and they were almost on the wing in nest #3. Still, our pilot project proved that rural ditches can provide habitat for nesting kestrels. 75% of the nest boxes left standing in the spring produced kestrels, and we can avoid tipping by stabilizing the box poles with cement. A big thanks to county engineer Lee Bjerke for giving us permission to install the boxes in Winneshiek county's right-of-way.

We will be looking to expand this program in the coming year, and we would love to hear from anyone who downloaded plans and built one of our kestrel boxes. Shoot me an email at ries93@gmail.com.
Posted by Amy Ries at 10:25 AM