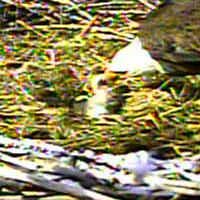 There were a lot of comments about eagle growth rate on Facebook this morning. According to Gary R Bortolotti, bald eagles may gain more weight per day than any other bird in North America. As in other animals, different body parts may reach adult size at different times. The growth of the legs will be complete about half-way through the nesting period, but the beak and flight feathers won't reach adult size until after the eaglets have fledged, or left the nest. In fact, an eagle's juvenile flight feathers are longer than its adult flight feathers, which it won't get until it is 3 - 4 years old. 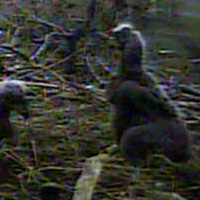 The two eaglet pictures are the first and last photographs taken, over a period of slightly less than a month. That should give you some idea of the physical changes the eaglets go through as they grow, although the photo album makes it even clearer. Our little Decorah babies will be taking to the wing before we know it.I've got a Facebook album of Forth St. Vrain eaglet growth 2010, published here: FSV Album

The kestrels have laid a third egg. The photograph of the female kestrel clearly shows what I've heard called her "eye spots". Although no one knows for sure why she has them, the most commonly accepted theory is that they help frighten attackers away. Unlike falcons and eagles, she should lay a bunch of eggs, although not all of them will hatch. Again, unlike falcons and eagles but like many other birds, kestrels are sexually dimorphic in plumage - males and females have different plumage. Wikipedia reports that plumage has more variation between the sexes than size.  Click on the picture for a larger view.

The Decorah eagle babies seem to have gotten off to a nice start today - thank goodness the bad weather is gone!
Posted by Amy Ries at 9:37 AM

﻿Despite today's snow, ice, and rain, the eagle family is doing fine. The parents were very careful to keep their babies sheltered. You can see Mom holding her wings out and up to keep the rain and snow from her young. The bowl of softer materials that the eagles built in the larger nest also helps keep the babies away from the wet. I hope this is the last snowstorm the eagle family faces.

We are also looking forward to peregrine season. I've got some estimated hatch dates:

The Xcel Pawnee kestrels have laid egg #2. I don't feel quite as comfortable forecasting hatch for them, but I'll guess (a little weaker than an estimate) that hatch will occur around 5/20/2011. The kestrels are very fun to watch - they normally have a large brood which grows very quickly and behaves much more frenetically than the eagle young. Here is a link to a kestrel laying eggs (this is not one of our sites, but the video is very nice):
http://youtu.be/EGmzbS7IOVE 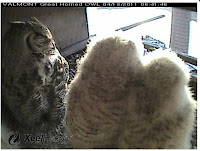 The Valmont owlets are growing rapidly. I need to thank the faithful forum members who have kept me up to date since we are having forum problems. I love these pics and would not get them otherwise. Click the Valmont Owl link in our nestviewer to watch this nest:
http://www.farmyou.com/falcon_cams/

The address looks a little odd because I moved the cams page to another domain (thanks, Ken!) to try to offload some traffic. But it is still the Raptor Resource Project. You can also visit our facebook to talk with other eaglecam fans:
http://www.facebook.com/pages/Raptor-Resource-Project/103786266324668

Eagles incubate for roughly 34-37 days, according to a number of online sources. Last year, the Decorah eagles laid three eggs: one on February 25, one on February 28, and one on March 5. The first eaglet hatched on April 3. This year, the eagles started laying eggs a little earlier, but had the exact same spread: February 23, February 26, and March 2nd.

As cam watchers have observed over the years, eagles incubate during some very difficult weather. The eggs are laid in a cup of grasses and other soft material (including corn stalks) that raise them above the "platform" of the larger nest. This insulative cup helps retain the heat of the adult eagles and provides additional protection from rain and snow. It also helps keep eggs from breaking (sticks and branches provide a hard, irregular surface) and is nicer for the adult eagles to incubate eggs in - at the risk of being anthropomorphic, I would prefer a bed of soft grasses to one of hard sticks any day.  I suspect the eagles feel the same way.

Some websites state that both male and female eagles are involved in building the nest, while others state that it is usually the female who places branches in the nest. In our experience, both the male and female eagle are involved in building the nest. Bob has observed that nest building is part of the eagles' courtship ritual: bonding begins with courtship and continues through nest building, copulation, incubation, and raising young. Both eagles bring sticks and nesting material in, both place sticks and material, and both move the other eagle's sticks around.

Eagles may also have a brood patch. Feathers are wonderfully insulative and great at shedding water, but can interfere with a bird's ability to transfer body heat to the developing eggs. The brood patch is a bare patch of skin that is well-supplied with blood vessels, making it easier for birds to transfer heat to their eggs during incubation. I don't have a photograph of a brood patch, but there is a real nice one on the Norfolk Eagle site: http://eaglenest.blogs.wm.edu/2011/03/05/incubation-brood-patch/

So who incubates more: the male or the female eagle? The female eagle incubates more, but the male shares incubation duties as well. This is not the case in all birds or even all raptors: the female owl at Valmont, for example, does all of the incubation duty.  In addition to sitting on the eggs, both birds also roll the eggs. This helps assure that all parts of the egg receive heat and prevents the developing embryo from sticking to the egg shell. The parents are very careful not to puncture the eggs with their talons and sometimes "ball" their feet to keep  from damaging them.

As the embryo grows in the egg, it develops (among other things) a sharp point on its beak, called an egg tooth, and a muscle called the hatching muscle. The hatching muscle tips the developing bird's head back. Once it is large enough, the egg tooth will come into contact with the inside surface of the egg. As the chick rotates its sharp egg tooth pierces the egg, causing first a "pip" (hole or crack in the egg) and eventually breaking all the way through.  It is not usually a quick process, and you can hear the babies as they hatch out. ﻿﻿


The eaglets are altricial. According to wikipedia: "In bird and mammal biology, altricial species are those whose newly-hatched or -born young are relatively immobile, lack hair or down, and must be cared for by adults; closed eyes are common, though not ubiquitous. Altricial young are born helpless and require care for a comparatively long time."

The eaglets are not able to thermoregulate, or control their body temperature, until they are 10-14 days old. During this time period, the eagles (usually but not always the mother) stick very tight to the babies. On a warm day you may see the baby eaglets exploring the nest, but on a cold or rainy day, they will be sheltered under a parent or two.

The eaglets will go through a number of physical changes as they grow. On hatching, they will be covered with a light-colored down that is uniform in color. The baby down will be replaced by a darker, medium-grey second down when the babies are between 9 and 11 days of age. Juvenile feathers will start to appear when the young eagles are around 24 days of age. These feathers will be dark, since eagles don't develop adult plumage (dark body, white head) until they are around three years old. The color of the eaglets' beaks and talons will also change as they grow.

Birds grow very rapidly and, according to Gary R Bortolotti, bald eagles may gain more weight per day than any other bird in North America. As in other animals, different body parts may reach adult size at different times. The growth of the legs will be complete about half-way through the nesting period, but the beak and flight feathers won't reach adult size until after the eaglets have fledged, or left the nest. In fact, an eagle's juvenile flight feathers are longer than its adult flight feathers, which it won't get until it is 3 - 4 years old.