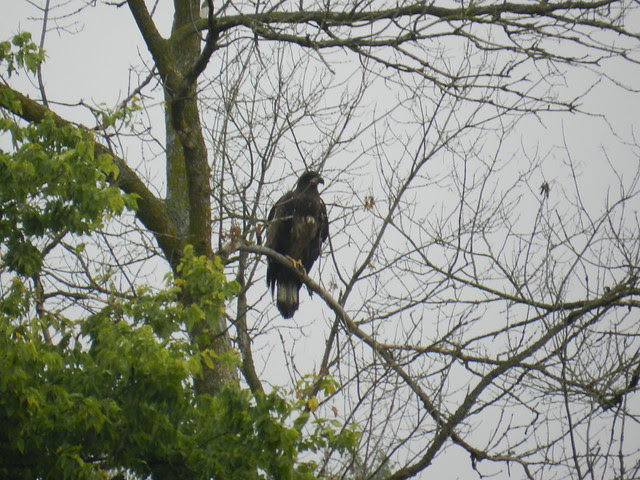 I'll start with a D14 report from Bob, who writes:

"Mary and I set out to locate D14 on the Upper Iowa River down stream from Bluffton, Iowa. We were getting a strong signal with the PTT receiver as we came down into the valley near what is called the Hutchinson Bridge. As we drove over the old bridge, D14 flushed from its upper beams. He flew to a nearby tree and we were able to get some pictures. Mary and I then met with Dixie Hutchinson to show her where D14 has been on their river property. The land owner from across the river joined us just as a team of horses pulling a large wagon and making lots of noise with their hoofs caused D14 to take flight once again. We were surprised to see him join another immature eagle (D13?) in the air. He broke off and returned to land on the upper beams of the old bridge. All of us could easily see his transmitter."

We believe that D1 remains in Polar Bear Park, but have not had an update for five days. Her transmitter is solar-powered, so it is possible that grey, rainy weather has prevented the battery from charging. I'll post new coordinates as soon as we get some.

The first Turkey vulture (BB) fledged yesterday at about 10:27am. We have a Ustream video highlight here: http://ustre.am/_1GOFB:1cZn. As of this post, LB is still in the barn. I've had some questions about whether or not the TV will return to the barn after they have fledged. I don't know, but have asked for a ground update. I'll post when I get it.

For the next two weeks, we will be testing equipment, building kestrel nest boxes, and installing a Peregrine nest box at a cliff in Bellevue, Iowa. Once we have plans drawn up for the kestrel boxes, I'll post them as well.

Happy birding, online and off!
Posted by Amy Ries at 11:39 AM

Some people enjoy watching the little Turkey vultures and others do not. The TVs behave quite differently from the eaglets: they spend hours a day beating each other up, don't play in a similar fashion, appear to frighten their parents (the hooligans!), and have a very unappealing diet.  They are fun to watch (if you don't mind intestinal tug-of-war) but there are not nearly as many 'awwwwwwhhh' moments. Both Bald eagles and Turkey vultures are raptors [note - I had a few of emails that pointed out this is debatable. Some experts argue that New World vultures should be placed into storks, others argue they should have their own order, Cathartiformes, and still others argue that they should be placed into raptors]. So why are their young so different? I think - and this is speculation - that the way the young birds play and interact with one another reflects their very different lifestyles as adults.

Since eagles eat live prey, they need to hunt. Since recently-killed prey has firm flesh still connected by tissue, muscle, and bone, they need to tear food. When Mom and Dad bring food in, the eaglets sometimes stalk it. Once the eaglets can stand and walk well, they also tear food with their feet, steal it from their parents and one another, and mantle to guard and protect it. Food play includes stalking, pouncing, and grabbing. A few examples:
Turkey vultures, on the other hand, eat primarily dead food (they have been observed eating pumpkins), detectable by the smell of ethyl mercaptan.  They don't need to stalk or hunt wary prey, although they do need to eat quickly to compete with other vultures and carrion eaters, including larger Black and King vultures. I don't know that carrion or hunks of carrion could be carried to the nest without falling apart: at any rate, Turkey vultures rely entirely on regurgitation. The young don't play with food much at all that we've seen: their parents regurgitate it, they eat it, and that settles it. As John Carton noted, the chicks learn to "gulp their food properly" in response to their parents' quick in and out feedings. Eating quickly is a necessary survival skill for turkey vultures, and they don't play with their food.
Eagles build huge nests, and the young eaglets mimic Mom and Dad's nest-building activity from a very early age. They move and place sticks and other nesting material, and play tug-of-war as well (perhaps preparing for the inevitable adult differences over where, exactly, that stick should go).
Turkey vultures don't build nests the way that eagles do. In this case, the adults spent some time preparing the straw prior to egg-laying: they pecked at objects, snapped straw into smaller pieces, and formed a depression for their eggs.  However, they invested very little time in maintaining, building, or caring for it once the eggs were laid. While the young turkey vultures roam around and explore objects, they don't engage in the same kind of stick and nesting material play that the eaglets do. In this case, no nest seems to equal no nesting play.

Turkey vultures and Bald eagles are both social, and both sets of young spend a lot of time interacting with one another. When it comes to play, the eaglets tussle, cuddle, preen, steal food, and play tug of war. The young vultures (vulturelets?) beat each other relentessly, with occasional breaks for preening. While the eaglets appear to play at the complex skills of hunting, nest building, and competing for food, the young vultures appear to play primarily at competition, period. Although Turkey vultures are social, this behavior leads me to wonder about the intensity of TV to TV food competition. Is this all about other carrion eaters, or do adult Turkey vultures beat each other up over food as well?
Although the behavior of the little Turkey vultures may not be as appealing as the eaglets to human watchers, their play and interaction is equally effective at helping to prepare them for the challenges of adult life. John predicts that they will most likely begin flying between August 28 and September 3rd. I've enjoyed watching them in the nest and look forward to his observations once they have left.

If you haven't watched the Turkey vultures, you can see them at: http://www.ustream.tv/missouriturkeyvultures
Posted by Amy Ries at 12:56 PM