We are starting to see courtship at a number of peregrine nests. Those of you who watched at last year might remember that the falcons were in full laying mode by the first week of April. The cold spring seems to have pushed nesting activities just a little farther back this year, since by the last week of March 2012 we already had peregrine eggs at three nests.

The falcons begin with ledge and cliff displays, bowing and calling loudly. The male brings gifts of food to the female, often engaging in acrobatic mid-air food transfers. As courtship progresses, the falcons build a scrape for their eggs, digging into the gravel with their breasts and pushing to create a scrape. The male may solicit the female by bowing and e-chupping. Finally, both falcons bow and e-chup over the scrape. 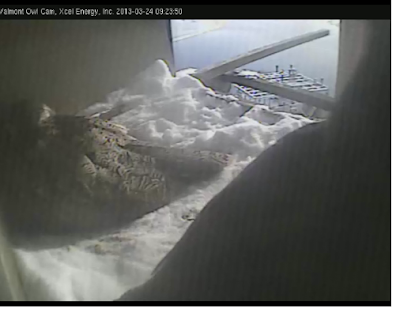 We are sorry to announce that the Valmont Great Horned Owl nest in Colorado has most likely failed. Snowflake began laying eggs on February 12, 2013, and incubated them through an unusually cold, snowy spring. Her eggs should have begun hatching around March 21, but we have seen no signs of hatch so far. She will most likely continue to sit on her eggs for another week or two before ceasing incubation altogether.

Like the Fort St. Vrain nest, this nest has a mixed history. The Valmont nest failed in 2010 when incubation was disrupted by a territorial battle. In 2009, another cold, snowy spring, Snowflake stopped incubating following a massive snowstorm. The nest also failed in 2007 following heavy snow, although the owls reclutched and hatched young later in April. We don't know for sure that the nest failed because of cold weather, but we've seen it happen here before.

The lives of wild birds are filled with challenges: weather, territorial battles, predators, and food supply all play a role in the success or failure of any given nest. Although Snowflake diligently incubated her eggs, it
appears there won't be any young at the Valmont nest this year. We will post if the owls reclutch.


It appears the first barn owl egg have hatched at Eaglecrest this morning! Tess laid 7 eggs between 2/19 and 3/04. Assuming all of them hatch, we should have barn owl eggs hatching over the next 13 days. A video: http://youtu.be/n-AtdPhYRSA.

You can watch the nest at: http://www.ustream.tv/eaglecresthawks. I especially love to watch the owls at night, when the IR light does a wonderful job of illuminating the nest cavity.

We often try to determine when hatch happened. This can be difficult, since hatching is not an on/off event, but rather a process that occurs over a period of time, as this time-elapsed video of a barn owl egg hatching at Hawk Creek Wildlife Center shows: http://youtu.be/uPACjB14Nww

For more about eggs and egg hatching, read this blog post: http://raptorresource.blogspot.com/2012/03/we-are-getting-lot-of-questions-about.html

About The New Nest

We are getting a lot of questions about the new nest. Here are a few answers.

Where is the new nest?
The new nest is still within the eagles' original territory. It is about 300 feet/100 meters east of the original nest, located between the bike trail and Trout Creek by Siewers Spring Road. We ask that anyone who goes to see the nest stay on the trail or sidewalk and avoid trespassing on private property. While these eagles are fairly tolerant of humans, visits to the nest tree will disturb them. All of our photographs are taken at long range.

Why did the eagles build a new nest?
We don't know why the Decorah eagles built a new nest, but nest building is a very common thing for eagles to do. Several studies have indicated that roughly 45% of eagles build more than one nest on territory. Some eagles that build new nests experienced failure in their old nest, yet even eagles that have experienced reproductive success will build new nests. The old nest had begun tilting as it settled on to the branches, so possibly that had something to do with it, but we don't know for sure. For more on alternate nest building, follow this link. This Connecticut study also has some interesting information on alternate nest building.

How many eggs have the eagles laid?
We don't know, but it seems reasonable to assume three, since Mom has a history of laying three eggs.

When will the eggs hatch?
We have to estimate a lay date based on the eagles' behavior and history. We believe she laid egg #1 on February 19th, so we are guessing hatch on about March 24th. We will announce hatch once we think we have it.

Where can I find Decorah eagle photographs and news?
The latest news will be posted on our facebook page. You can also follow this blog, although it isn't usually as up to date as facebook. Photos can be found on facebook or at our flickr page (look in the 'New Nest' set). All photos are courtesy Jim Womeldorf unless otherwise stated.

Are you putting up cameras at the new nest?
We are still working out the details, but we hope to put up cameras this fall, once the eagles have concluded this year's season and the young have dispersed from the nest.
Posted by Amy Ries at 4:40 PM 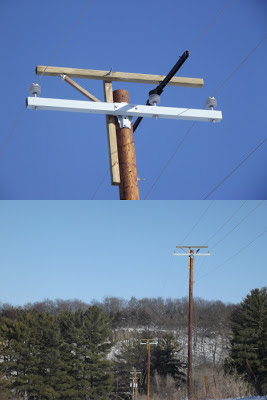 Alliant Energy has begin installing the eagle protection perches in Decorah. The first three went up on the lines and poles to the southwest of the trout hatchery.

This photo shows two views of the perches. In general, avian electrocution happens when a bird makes a connection between ground and a live wire. Energy flows through the bird's body to ground. The perches built by Mr. Condon's class in Decorah are located above the power lines and Alliant added an insulative sleeve where the live wire passes under the perch. The sleeve is long enough that even a stretching eagle should not be able to connect with the wire.

We are sometimes asked why we band birds. Banding birds provides an invaluable way to study their life histories and chart changes in bird populations, including changes in range, population numbers, and migratory behaviors. Bands do not hurt birds or impact their individual or reproductive success.

There are a number of different ways to band or mark birds. We use two leg bands on Peregrines: an aluminum leg band (currently silver in the midwest) on the right leg, and a multi-color band (currently black/red in the midwest) on the left leg.  Both bands are very light and fitted after the bird's leg is fully or very near adult size. The silver band contains a long number with a unique federal identifer assigned by the North American bird banding lab. The multi-colored band is an auxillary marker distributed regionally by the Raptor Center at the University of Minnesota. The numbers are larger and etched in a different color than the band, so they are easier to read.
In general, we band young peregrines taken from the nest by hand between 20-30 days of age, before they start flying. Banding can take anywhere from 15 minutes to an hour, depending on the site. Once we return the young falcons to the nest, their parents come back quickly - we have never witnessed a peregrine abandon young after banding. We used a pan dam trap to catch bald eagles D1 and D14 after they were on the wing. Other methods of trapping flying birds include mist nets, rocket nets, bal-chatri traps, or even hand catch depending on the size, weight, and wariness or aggressiveness of the bird in question.

One of the team usually holds the bird while someone else bands it. Both bands are fitted around the bird's legs before they are closed.  The aluminum band is closed with a pliers and the multi-color band with a pop-rivet gun: a technique developed by Charles (Chuck) Sindelar, who still bands with us and was instrumental in bald eagle recovery in Wisconsin. Since female birds of prey are larger than male birds of prey, females take slightly bigger bands. We sex peregrines by tarsus thickness and 'voice' (female birds have lower voices). Although male bands are smaller than female bands, we discovered that females banded as males aren't damaged when we trapped 'Husker', a 1998 fledge from the Woodman Tower in Nebraska. Husker, a female banded as a male, fledged 19 young between 2001 and 2007. Her slightly tighter bands didn't affect her legs or her ability to care and provide for her young.

When we band peregrines, we record the federal band number, the auxiliary band number, the bird's gender, the actual or approximate age of the bird, the site name, the site coordinates, the bird bander, and other notes (parent bands, overall bird health, any treatments given (such as Spartrix for Frounce), and so on). We report this information to the Bird Banding Lab (BBL) and the Midwest Peregrine Falcon Database, an online interactive database maintained by the Midwest Peregrine Project and the Raptor Center.

Banding birds provides an invaluable source of information, since the bird's life history can be looked up and shared with others. Our peregrines have been spotted on oil rigs in the Gulf of Mexico, in the Eastern United States (traveling cross-country from the midwest), in Nebraska (traveling cross-country from Rochester, New York), in Florida, in Canada, and in many locations in Minnesota, Iowa, and Wisconsin. You can report bands to the Bird Banding Lab by calling 1-800-327-2263 or going to their website at http://www.pwrc.usgs.gov/BBL/bblretrv/. If you have retrieved bands from a dead bird, you may keep them.  You will need to know:

If the Bird Banding Lab has information on the bird, you'll be emailed a cool certificate that provides information about your bird. The bird bander will also be notified. We love notifications!

We've banded Peregrines on power plant catwalks and in elevators, on rooftops, on the ground, and hanging from ropes. We've banded on calm sunny days and in howling near-gale force winds, racing down smokestacks and up cliffs just ahead of thunderstorms. Most thrillingly, we have witnessed 'banding season' go from one afternoon, when the Peregrine falcon was so highly endangered that only a handful were nesting in the midwest, to a month-long mad scramble to fit everyone in. Thanks to the efforts of bird banders, the return of the Peregrine falcon in the United States is perhaps the most documented population phenomena in natural history. We know the lineage, natal nests, life histories, and genetic make-up of the majority of Peregrines nesting in the United States today.

Watch this video for a look at Peregrine banding at Great Spirit Bluff near Dresbach, Minnesota.