By now most of you are aware that all four young falcons jumped from the nest box at Great Spirit Bluff on June 17th. They were approximately 10 days away from fledging. Searchers were only able to find one of four falcons. Bob evaluated Jonathon, a male, and decided to augment/foster Jonathon into another nest box rather than risk having him jump out again. He chose Red Wing Grain as the new site, since the two young falcons there are about the same age as Jonathon. We fostered Jonathon on the morning of June 19th and he seems to have adapted quite well to his new surroundings.

We chose not to continue the search after the first night. Like many young animals, the falcons either hide or try to scurry under cover when they hear threats approaching. We didn't want to drive them so deep in into the undergrowth that Michelle and Travis couldn't reach them. Since then, we have heard the young falcons calling from the area below the nest box, and we have witnessed Michelle and Travis carrying what appears to be prey down below. We hope to see the young falcons at the nest box or on the ledge again, but only time will tell.

We have received numerous questions regarding the nest box at Great Spirit Bluff. Is it a safe box? It is. In the Midwest alone, over 1,000 falcons have been produced at nest boxes that use this design, which provides shelter from the weather and perches for sitting. Netting under the boxes is out of the question, since the falcons would snag their talons, and holes or venting in the side of the boxes to let in wind would also let in rain and snow.

Absent external stimuli, Bob has never seen young falcons jump from a nest box or cliff as they did at Great Spirit Bluff. He believes that insects caused the young falcons to stampede from the box. Just a few weeks ago, 17 of 20 adult whooping cranes in central Wisconsin deserted their eggs due to black flies, as reported in the Wausau Daily Herald. http://www.wausaudailyherald.com/article/20130525/WDH01/305250345/Black-flies-endanger-whooping-crane-nests

Please refer to this blog post for more information about insects, intervention, and fosterage: http://raptorresource.blogspot.com/2013/06/great-spirit-bluff-falcons-intervention.html

Although we knew the gnats and black flies were bad, we were unable to intervene earlier, since that would most likely have caused the young falcons to jump before they had developed their flight feathers. In short, the risk of injury or death was higher if we went to the box than if we did not. This was an unusual and unfortunate situation. We haven't seen it before and we hope never to see it again.

To view the Red Wing Falcons, click on this link, and then choose Red Wing Grain Falcons from the left side and click on that link: http://www.farmyou.com/falcon_cams/index.html. This cam may not always be available, since it has limited bandwidth.

A big thank you to the Howe family for responding so quickly, climber Dan for last minute assistance, and the staff of Red Wing Grain for letting us foster a falcon into their box on very short notice. Bob made a difficult decision in a stressful situation, but he made it in the best interests of Jonathan, who is thriving in his new home.
Posted by Amy Ries at 10:15 AM

Bob made a decision today to intervene in the situation at Great Spirit Bluff, where four young falcons fell from the front perch. Intervention is always a tough call. He decided to intervene because:


In short, GSBDweller let us know that young  falcons were jumping from the box. Bob decided this unusual behavior needed to be investigated and headed for the bluff. George Howe, director of the Mississippi Valley Conservancy, quickly put together a search team and found another climber to help Bob, since it isn't a good idea for one person to be out on rope alone.

George's team went up the bluff from the bottom, where they found falcon Jonathan. Bob's team waited on top, since the last young falcon was out on the perch. They didn't want to rappel and risk bumping it, since its flight feathers were too short for true flight. If the falcon fell, it might survive if it hit leaves or small branches on the way down. Or it might not. The team elected not to rappel unless the young falcon went back into the box.  However, they were able to observe clouds of insects around the young falcon and adults, once they perched. The falcons were clearly bothered by the insects that swarmed them.

Bob and Dan had pulled back from the bluff and were packing up when the last young falcon fell. Dan rappelled down to the end of his rope but was unable to find the young falcon. The talus slope is steep and covered in thick brush, and the young falcons would probably hunker down and remain quiet in the presence of human beings and other threats, making them very hard to find. The ground search is over, since at this point we would be more likely to do harm than good. We don't want to drive the young falcons from the top of the talus slope into the brambles, where Travis and Michelle would be unable to reach them.

So now we needed to decide what to do with Jonathan, the young falcon that was recovered. He was seemingly healthy. Did we want to put him back in the box? Bob decided against it, since he thought it was highly likely he would leap again. We looked at nests with falcons that were the roughly the same age. Red Wing Grain had two falcons only about a day apart in age. We decided to foster Jonathan because:
Bob will most likely be fostering/augmenting Jonathan on Wednesday morning (he will keep Jonathan in his mews for a little observation prior to release). It seems likely that our pattern of disappearing and dying young falcons might be caused by insects and parasites in some combination - a "mega-hatch" caused by the late, wet spring. We'll let you know what we find out.

We have some film clips here:
Posted by Amy Ries at 12:41 AM

On May 22, 2013, the falcon eggs at Xcel Energy's Blackdog nest box began hatching. Immature female 16/U laid four eggs and hatched three. Although both parents diligently cared for their young, they never seemed to thrive. On May 27th, a watcher reporter strange black patches on one of the young. By May 31, two of the three young were dead. We don't know how the first one was disposed of, but the parents fed the second young to the third.

In watching the box, we noticed the strange black patches. We also saw that the remaining baby didn't seem to be developing properly. It was quite small for ten days of age, spent more time under its mother than might be expected, and didn't seem to be developing feathers properly. Perhaps the young falcon had Frounce, a yeast infection of the digestive tract that interferes with food intake. We decided to go up the stack and treat it with Spartrix. This has been a very hard year on our falcons and we really didn't want to lose any more.

I called Dan, our contact at the plant, and made the necessary arrangements. The Blackdog nest isn't especially easy to get to, since it is at the 600' level of the plant's smokestack. An elevator takes you to the 300' level and ladders take you the rest of the way. All told, you need to plan on a minimum of 50 minutes to visit the box. A big thanks to Dan for taking the time out of his day!

I was really shocked when we finally got to the nest. The falcon was very small, coated with black gunk, and swarming with parasites. They were on its back, belly, under wings, and neck. We thought the black gunk might be prey remains, but it was actually scabs, dried blood, and damaged feathers. The parasites,  probably Amblycera or Hippoboscidae, were feeding by chewing soft areas of skin, causing an area of localized bleeding from which they drank.

I decided to give the young falcon Spartrix just in case (Frounce could easily kill a falcon this stressed), and then Dan held the falcon while I carefully cleaned it off. 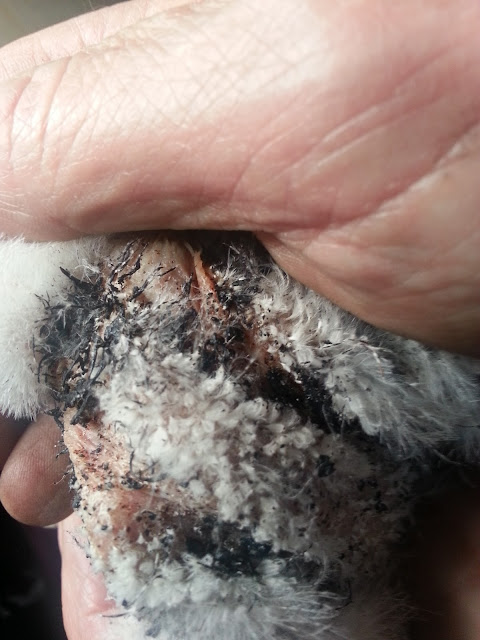 This is a closeup of the falcon's back and neck. The parasites caused extensive damage, destroying feathers,  interfering with feather growth, and delaying development. I killed and swabbed and crushed and killed and swabbed and crushed again. Once the parasites seemed to be (mostly) dead, I checked the box for anything that might be harboring more, took a few bits out, and returned the baby falcon, along with a dead quail. Mom was back in the box before we were back in the stack, and the quail was gone by the time we reached the bottom. Despite the damage, the young falcon had a good crop and even seemed somewhat feisty, weakly footing with tiny talons. While I don't know that the falcon will survive, we increased its chances of survival.

The parents have been very busy preening the young falcon, sometimes what seemed (to human watchers) rather roughly. We now know that they were trying to remove parasites. But where did the parasites come from? Since lice are transmitted by direct contact, I'm guessing that the lice were brought in on a prey item. According to Science Direct: "With no wings and very small eyes, chewing lice are, by and large, helpless away from their host." However, they were presumably able to hop, skittle, or jump from prey on to the young birds, who lack the armoring feathers of adults and weren't yet preening themselves. We'll be watching this box closely over the next couple of days to see what happens to the young bird.

Ever feel like a tick was crawling on you? Hours later, and I can still feel the lice crawling...
Posted by Amy Ries at 9:10 PM