N2B, or the New Decorah Nest

Members and friends of the Raptor Resource Project spent the last two days building an eagle's nest - or what we hope will become an eagle's nest - near the former site of N2. We put together this blog to answer questions about our work and what it means.

What happened to N2?
The tree that N2 sat in was destroyed during a storm at around 3am on the morning of Saturday, July 18. The storm has been reported as either an F1 tornado, straight-line winds, or a microburst. We don't which of the three it was, but it certainly did a lot of damage!

Were the eagles harmed?
No. The entire family was accounted for not long afterwards.

Why did you build a nest? Don't Mom and Dad usually make their own nest?
Eagles usually make their own nests, but when Neil suggested building a nest, Bob was immediately intrigued. He greenlighted the project and we began planning it. Could we build a nest the eagles would adopt? Literature and Neil and Laura's experience building red-tailed hawk and great horned owl nests indicated that we could. In addition to being thrilling in its own right, the project has management implications far beyond Decorah. Like our kestrel and falcon nest boxes, it could be a useful tool for increasing, maintaining, or shifting bird populations.

Why are you calling it N2B?
N2B stands for N2Bob. Bob passed away before we had a chance to begin, but we decided to carry forward in his honor.

We made two scouting trips to the site. On the first trip, Dave Kester suggested a cottonwood that had all the features we were looking for: an open flyway, wonderful perching spots, and a good fork in which to start the nest. Neil climbed up into the tree on our second visit to confirm it while the ground team set to work collecting sticks and getting the area ready for action.

Nest construction began on Wednesday, August 19. Neil and Kike (Kee-Kay) Arnal climbed up to the nest and bolted four 2x4s to build a small frame in the fork of the tree. Meanwhile, the ground team collected bundles of sticks from N2 and bags of leafy debris from the forest floor. Sticks were hauled up so Neil and Kike could insert them between the 'rings' of the 2x4s, creating a stable platform for nest building to begin. Once the base was in place, Neil wove more sticks in a circular pattern, building the nest higher. The two periodically dumped leafy debris into the nest to fill and raise it, alternating sticks and leaves in layers to build a strong, stable platform...much like eagles would do. 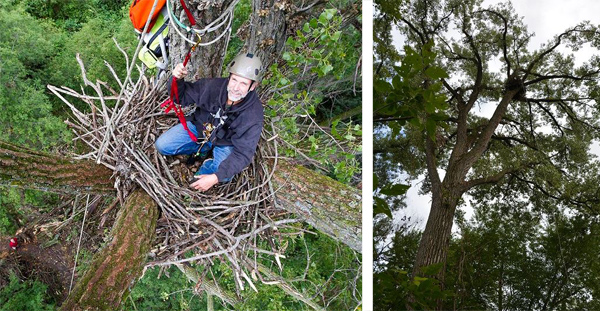 We decided it was time to knock off work until the next day (August 20th), when we returned to finish the job. Amy got to go up with Kike to provide some finishing touches. She wove branches around the outside rails and helped add more debris from the forest floor. While individual sticks and leaves might not seem very strong, the outside edges of the nest were strong and stable enough to stand on.

I think we could have stayed in the tree for the rest of the day, but N2B was intended to be a starter or catalyst nest, not a finished product. We rappelled to the ground, leaving nothing behind but a pair of road-killed squirrels per Bob's instructions.

Why did you put the nest up so fast? Will Mom and Dad do any building if they use it?
Mom and Dad started building N2 in October of 2012, which is just around the corner. We wanted the catalyst nest up with time to spare. Our work notwithstanding, the eagles will bring in more materials to N2B should they choose to use it. Nest building is an important part of bonding and our project won't change that.

Did you put cameras up?
We haven't yet. We'll make a decision on cameras in September. In the meantime, we'll be watching the nest. Mom soared overhead to check out our work on Thursday. We hope she approves!

Some links on contructing or erecting artificial bald eagle nests:


A couple of news stories:
This project would not have happened without the help and support of an awful lot of people. A million thanks to the landowners for giving us permission to undertake this project. A million more thanks to Neil Rettig and Laura Johnson, Kike Arnal, Dave Kester, John Howe, Brett Mandernack, Jim Robison, Randy Christman, Ryan Schmidt, Jason Thiele, Pat Schlarbaum (Iowa DNR), Maggie Jones, David Linton, Rob Horowich, Nora and Joe Hensley, Robin Brumm, Willard Holthaus, and Chris Gourley. If I forgot your name, email me: ries93@gmail.com and I will add it.

Some bonus photos from Laura and Robin...