This article was first published in the Newsletter of the Iowa Archeological Society
Spring 2015, Issue 232, volume 65 No. 1.

When we began our efforts to return the peregrine falcon to the bluffs of the Mississippi River in 1998, we collaborated with Effigy Mounds National Monument in Harper's Ferry, Iowa. Efﬁgy Mounds National Monument runs along the west bank of the Mississippi river. It preserves prominent bluffs, unfragmented forests, and over 200 prehistoric mounds constructed by groups of indigenous people more than one thousand years ago.  The mounds usually take one of three different shapes:
I became very interested in the mounds while we were hacking young falcons from Hanging Rock, located at the north end of the Monument.  I learned of stunning aerial images of effigy mounds outlined in white lime and photographed from small planes.  We owe these images to the late Dr. Clark Mallam, a professor of anthropology at Luther College in Decorah, Iowa from 1940 to 1986.
Dr. Mallam believed that the effigy mounds were works of art. He conscripted his students to haul hundreds of 50-pound bags of Luther College football field lime out to the bluffs to outline the monuments, while he photographed their work from using small airplanes.  Altogether, Dr. Mallam recorded 220 mounds on film. I still run into students who smile while recalling the monumental effort it took tote the lime out to the bluff top mounds and photograph the mounds.

When I first viewed Dr. Mallam's aerial images, I was immediately struck by the shape of the bird mounds, which greatly resemble the silhouette of a peregrine falcon.  The similarity inspired me to research mound builder culture. Over the past decade, I have found a great deal of evidence to prove that the bird mounds are in fact falcon effigies. The mounds resemble falcons, the mound builders venerated falcons, and the mounds are often located near historic falcon eyries. 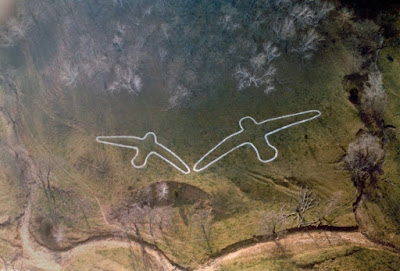 This aerial image of two falcons is located on private property adjacent to an historic falcon eyrie near Lansing, Iowa.  The falcon on the right has a wingspan of 227 feet and the falcon on the left has a wingspan of 141 feet.  These two falcon effigies are the largest bird effigies remaining in the State of Iowa.  Their long wings and general body plan resemble falcons more than eagles, hawks, or generic passerine birds.  LIDAR, or Light Detection and Ranging, shows the resemblance even more clearly.  LIDAR is an optical remote sensing technology that can measure the distance to properties of ground targets by illuminating the target with laser light and analyzing the backscattered light. The spectrum it uses penetrates foliage and provides high-resolution ground surface imaging.

The LIDAR image below was taken of a Wisconsin bluff top along the Mississippi river. It shows drainage, watershed topography, and a detailed image of a falcon effigy, which has a wingspan of 271 feet. If you look closely, you will see the falcon's head is directed left. Visitors to the mound report that it appears to have a curved beak. 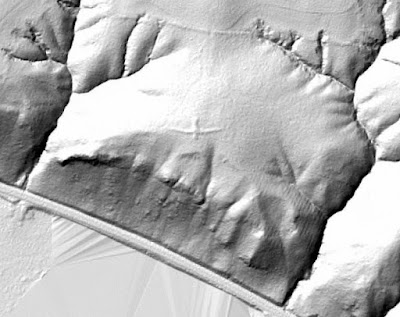 A professor at Luther College in Decorah, Iowa, told me soil analysis revealed that some of the material used to make these massive earthen effigies was mud gathered from the river bottom.  I was completely shocked since sometimes we have to haul ropes and gear from the bottom of the bluff tops to band falcons, a lung and leg-busting effort even with modern backpacks and hiking gear. I can't imagine the amount of work it would have taken to haul thousands of pounds of mud up to the bluff tops, which tower 400 feet over the river in some places.  Surely, the effigy builders would not have bothered unless the project was grandly important to them. 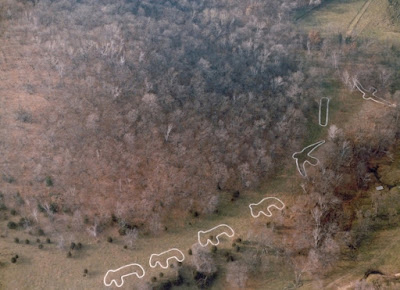 Figure 3: More effigies of four bears, two falcons and one linear mound.  Each of the bear effigies are approximately 85 feet long.

Several decades ago, I was standing below a large cliff near Lansing, Iowa.   An elderly gentleman approached me and asked what I was looking at. I told him about our falcon reintroduction work and expressed the hope we might someday have falcons back at their historic cliff nest sites.  He enthusiastically responded, "You mean duck hawks!" and went on to tell me that duck hawks were his entertainment before radio and television.  Fifteen years after we began our cliff-directed releases, I now understand what he meant.  When I carry out my spring cliff surveys, I look for peregrines hammering bald eagles, the occasional golden eagle, red-tailed hawks, red-shouldered hawks, and (to a lesser extent) turkey vultures as they make their way up the Mississippi river flyway.  This territorial behavior by the falcons is nothing like crows mobbing an owl or black birds mobbing a hawk. The defending falcons put on an amazing, acrobatic show: diving, chasing, and loudly vocally protesting as they drive away or outright kill birds many times their size.  This impressive sight must have inspired the mound builders to build falcon mounds and adopt the falcon as a model for warriors who achieved leadership through daring feats in war and hunting.

Growing up in Minnesota, I was accustomed to seeing Indian mounds.  Minnesota at one time had over 11,000 known mounds.    Most were conical mounds varying 25 to 40’ in diameter and three to eight feet high.  However, one mound in northern Minnesota measures 100 by 140 feet and is 25 feet high. The mound is composed of 5,000 tons of earth and thought to contain the remains of thousands of individuals.  Most mounds served as burial sites, although some of the effigy mounds appear to have been purely ceremonial in nature.

The remaining falcon effigies along the Mississippi river are commonly found near historic falcon eyries. Sadly, far too many mounds have been destroyed.  In 1892, Theodore Lewis surveyed the Harpers Ferry, Iowa “Great Group” of mounds.  He identified approximately 900 mounds, of which 274 were effigy mounds.  By 1973, less than a dozen badly disturbed conical mounds remained.  This hallowed ground had been plowed under or dug up, and the graves robbed of their bones, implements, and ceremonial artifacts. The largest mound group ever recorded in North America was all but gone.

I first began looking for falcons on these cliffs thirty years ago, in 1983. I longed to see them back where they truly belonged, as mound builders and earlier generations had. Thirteen years later, I was tired of waiting. I moved to northeast Iowa, built a rock-lined eyrie with the help of several friends, and raised falcons for release. Not everyone approved of the project. The peregrine falcon was still endangered and our proposed cliff releases attracted a great deal of controversy, especially since earlier release attempts had failed. However, I believed that it could be done. We persevered and, despite influential opposition, received the backing of the Iowa DNR and Effigy Mounds National Monument. We hacked falcons in 1998 and 1999 from Hanging Rock at Effigy Mounds, an arduous process that required a 100-mile round trip and a three-mile mosquito-infested hike along a muddy, narrow trail every day, for over 40 days each season.

In 2000, the first falcon returned to the cliffs of the Mississippi river at Queen's Bluff, a large cliff located south of Winona, Minnesota. The unnamed female was a cliff hack from Effigy Mounds in 1998. Our project had worked! The move, the fighting, the planning, the building, releasing, driving, and hiking - all of it had paid off, and falcons were back! The long wait was finally over and we had accomplished our goal.

The falcons return from their winter haunts toward the end of February. As soon as they take up residence on the bluffs, every migrating bird of prey on the Mississippi flyway has to run the gauntlet of the territorial falcons. Sometimes when I am down below a river cliff, I see a migrating eagle or hawk making its way towards a cliff with falcons. I wonder: will this bird catch the wrath of the territorial falcons? Just as it nears the cliff, it loops out over the river, bypassing the cliff face entirely. It always brings a smile to my face. That bird has been educated.  But don't take my word for it... visit the Upper Mississippi River cliffs and come see it yourself!  On the river's east bank, the majority of the cliffs can be found from Diamond Bluff, WI south through Prairie Du Chien, WI. On the west side, the cliffs run south from Red Wing, MN to Waukon Junction, IA. It is a spectacular setting for a spectacular bird of prey, and an ongoing show.

We owe a special debt of gratitude to the many falconers who supported our work, along with the Iowa DNR and Effigy Mounds National Monument. Thank you for your support.
Posted by Amy Ries at 9:58 PM