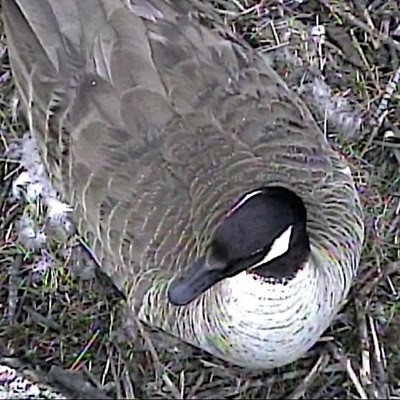 Three Canada geese at Eaglecrest are currently sitting on eggs. "Wilma", in the home tree, has laid seven eggs to date. She started full incubation on March 4th, which puts her hatch between March 27 and March 31. Betty has three or more eggs in the east pond nest, and Lucy has two or more eggs in the elevated pond nest.

The most common question about Eaglecrest's Canada geese is probably "How will the parents feed so many young?". While large broods are fairly common in many kinds of birds, Canada geese don't have to feed their young. Read on to learn more!

So what's the big difference? Precocial birds like Canada geese lay energy-rich eggs to support the greater in-egg development of their young, who hatch ready to go. Their large, energy-rich eggs may contain almost twice the calories per unit weight than the eggs of altricial birds, which means that precocial females must obtain abundant food resources before laying eggs. Altricial birds like bald eagles, barn owls, and peregrine falcons do not have such large nutritional demands before egg-laying, but they have to find sufficient food once their helpless young hatch. While individual precocial birds are vulnerable to predation, it is much less likely that an entire brood will be eaten or destroyed. Altricial young cannot leave the nest prior to fledging, while precoccial young leave the nest quickly and have some ability, even when very young, to avoid predation.

Stanford University also tells us that there seems to be a trade-off in bird brain sizes related to the the degree of precocity. Precocial species have relatively large brains at hatching, but their adult brains are smaller relative to body size (the brain/body-mass index) than those of altricial birds. While altricial young hatch with smaller brains, they have highly efficient digestive tracts and a rich, parent-provided diet. Post-natal brain development is great and adults have proportionally larger brains than precocial species. Is this because they have more energy available to grow larger brains, or is something else going on? We're still trying to figure it out. This abstract hypothesizes that delaying brain development (by lengthening childhood) gives brains a longer period of time to grow and become more complex: http://goo.gl/sNw3xe.

At any rate, our hatchlings face very different challenges. Precocial Canada geese are relatively mature and mobile from the moment of birth, unlike altricial Bald eagles, Barn owls, and Peregrine falcons. Eagle, owl, and peregrine parents bring food into the nest for their young, often caching or storing prey for later consumption. Their young don't need to leave the nest or procure food until they fledge. The young goslings leave the nest within 24 hours of hatching and do not return to it. While their parents continue to provide protection and care, the goslings feed themselves.

The precocial goslings are also able to thermoregulate right away, unlike the eaglets and owlets. Altricial birds require their parents (or a parent) to apply warmth until their down feathers are developed enough to insulate them. The eagle parents and mother owl will spend a great deal of time huddling over their young after they have hatched, but the Eaglecrest geese will take to the water quite quickly, with no huddling required.

Eaglecrest offers a plethora of wildlife, including Canada geese, for watching. Visit http://www.ustream.tv/eaglecresthawks to see them! Again, we are anticipating goose hatch some time between March 27 and March 31.

Developmental Modes and Developmental Mechanisms can Channel Brain Evolution
http://openi.nlm.nih.gov/detailedresult.php?img=3037498_fnana-05-00004-g003&req=4
Posted by Amy Ries at 11:20 AM