What's on the menu at the Decorah North Nest?

Kike collected prey remains from the Decorah North nest when we were working on cameras in the fall of 2017. Since my family was tired of animal parts in the garage and 2018's fall camera work is just around the corner, I decided it was time to get them identified!

The photo below shows all of the remains that Kike recovered from the nest. In all, he found 23 white-tailed deer remains (4 partial skulls, 18 leg bones, including four with the hooves still hatched, and one sacrum that measured 3-7/8" wide by 7.5" long), three wild turkey remains (legs with the claws still attached), one opossum skull, one raccoon skull, an unknown set of wings, a dry corncob, 4 unknown vertebrae, 1 unknown skull fragment, and some unknown mammalian leg bones. We also found some miscellaneous clods of fur that looked like white-tailed deer fur given the color, texture, and size of the fur piles. These were not included in our count. 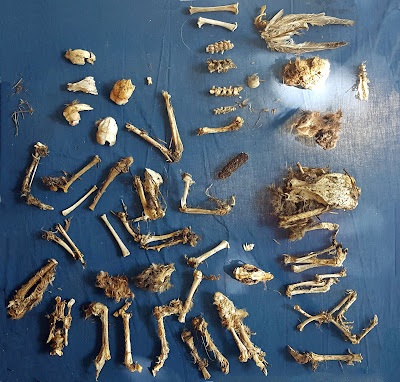 I was really surprised that we didn't find more fish remains! Sherri Elliott provided this list of menu items from the 2017 North Nest season:

What we saw come into the nest was in line with our expectations about what eagles eat overall.  As we've seen in our other nests, the North Eagles have a preference for fresh fish but will happily eat other foods, especially if those foods fall into the low risk/high reward category - think cow placenta, which takes very little energy expenditure or risk to get when cows are calving near your nest tree. However, if we had been relying on nest remains to determine eagle diet, we would have had a very distorted view of their food web. The prey remains we find in a nest might not adequately reflect what the eagles are eating, especially if they are eating foods that don't leave prey remains behind (placenta, innards), decompose quickly or fall into the nest (small or previously butchered prey), or are eaten by nest visitors like mice, squirrels, and other birds.

Having said that, I was surprised by all of the white-tailed deer. We've been asked about it several times. Were the deer killed by a combine? Were the deer road-killed? Are the eagles preying on live fawn deer? What's up with all the deer?

To solve the puzzle, we have to start with the season. Mr. and Mrs. North were bringing in fawn deer between April and mid-May. Combines aren't used for discing, planting, or early cultivation, which rules out combine-killed deer. There aren't a lot of hay fields in the area and it is also too early for haying. How about road-kill? We can't rule it out entirely, but the area doesn't have many roads or much traffic, and the whole legs and sacrum were not smashed, broken, or splintered, something I would expect to see in road-killed deer. Many of the deer parts were also fairly well-developed, with small black hooves and/or bits of fur still clinging to them, which rules out aborted fetal deer.

Were Mr. and Mrs. North predating fawn deer? We used to assume that any deer brought into the nest were scavenged, but bald eagles have been observed predating fawn deer. In 2011, naturalists documented predation of a radio-collared white-tailed fawn in Menominee County, MI. In 2016, biologist Sophie Gilbert documented bald eagle predation of Sitka Black-tailed fawns. In 2017, a landowner in northeastern Wisconsin witnessed an eagle attack and kill a swimming fawn. Once the fawn was dead, the eagle dragged it to land and began feeding. In other words, it is possible that Mr. and Mrs. North were preying on fawn deer, not simply finding them dead.

The documented research on eagle/fawn deer predation tends to indicate that eagles don't commonly predate deer, so why are Mr. and Mrs. North bringing so many deer to the nest? While four or five deer (based on skull count, leg count, and observation) isn't a whole lot of deer either population or percentage-wise, it is more deer than were documented in Gilbert's study or the study done in Michigan. A few thoughts:

What did we learn? The North nest prey remains did not accurately reflect the North's overall diet, but still yielded some interesting surprises! Given the scarcity of data on eagles predating fawn deer, we'll be looking into this issue more deeply. I'm also curious about the lack of opercular bones given all the trout and suckers that were brought into the nest. We found them in the Fort St. Vrain nest. Why aren't they here?

Did you know? Bonus Skull!
Teeth are my best friend when it comes to skull identification. The skull below is upside down. Our mystery animal has some pretty unique teeth. Its combination of sharp front teeth and molars for grinding mark it as an omnivore. How many front teeth does it have past its sharp canines? It's hard to see here, but I counted ten. This marks it as an opossum! Opossums have 50 teeth total - more than any other North American land mammal! https://en.wikipedia.org/wiki/Virginia_opossum 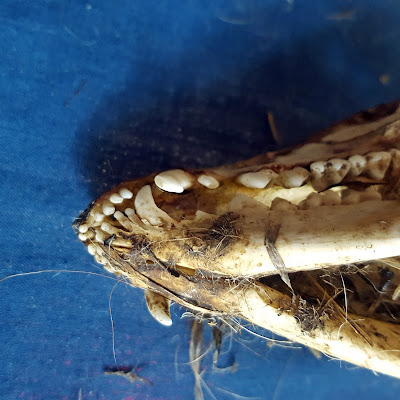