Sounds of the Eagles

I just finished the book Birdsong by Don Stap, a book which seeks to answer the question Why do birds sing and what do their songs mean? Most studies of bird song have been done on oscine birds, which are a subset of passeriformes with a complex voicebox. Many oscine birds such as chestnut-sided warbler, brown thrashers, hermit thrushes, and starlings sing complex sounds that might include, depending on the bird, buzzing, clicking, trilling, and warbling. Non-oscine birds like bald eagles (an accipitriform) might fascinate us with their striking colors, amazing flights, and sheer size, but their vocalizations don't tend to overwhelm us with their beauty or musicality.

After reading Birdsong, I decided to download some spectrogram software and run a few eagle vocalizations through it. The software I chose was Praat, a powerful free acoustical analysis program available from the University of Amsterdam. I wanted to see how 'questionable' copulatory vocals (are they mating?) appeared next to known copulatory vocals (they are mating!). 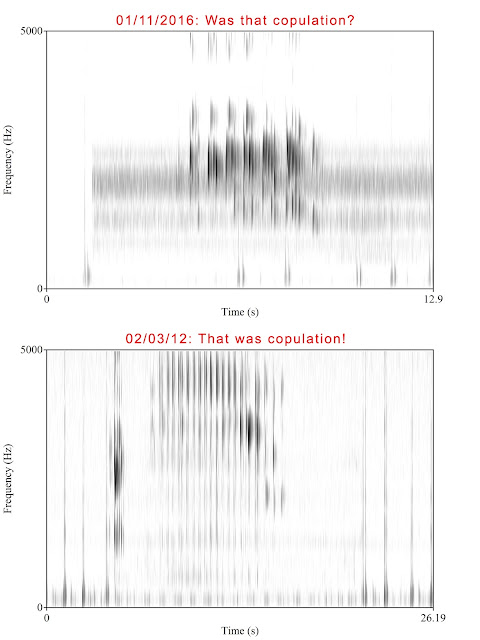 This was the sort of thing I tended to see. Copulation followed a pretty clear pattern, and Dad also tends to have a higher voice than Mom as shown by the sonograms above. 'Was that copulation?' is Mom alone and was not, in fact, copulation: the bars are low (signaling Mom's deeper voice), thick, and pretty distinct. 'That was copulation!' starts with a brief vocal by Mom at left, and continues into Dad's copulatory vocals - high, quick, and a little complex.

Did all eagle vocals look somewhat like copulation? While Dad's copulatory vocals tend to have a unique sound (I listen for a little warble or chirp and count to seven), eagles don't have complex voiceboxes, and the top vocal isn't that different from the bottom vocal. I decided to compare known non-copulatory vocals next. 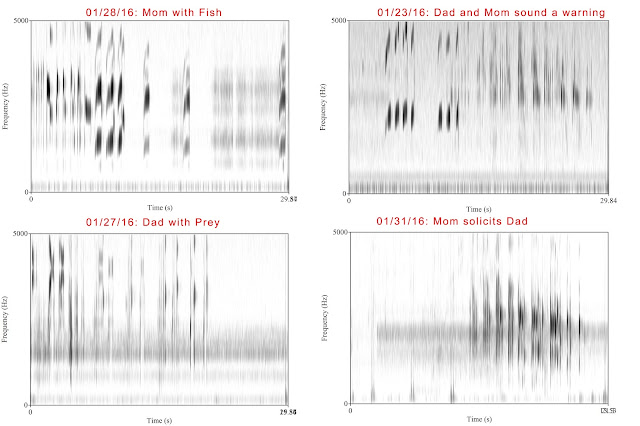 Look at 'Mom with a Fish'. It was a cool sounding vocalization and doesn't really look much like copulation. If anything, her initial vocalizations look a lot like Dad's in the 'Sound a Warning' spectrogram , although they are lower. She was mantling a fish after what sounded like a couple of warning vocalizations before she came to the nest, and concentrated energy in high and low pitches, just like Dad did with his initial warning to an unknown neighborhood intruder. The second part of 'Sound a Warning' features Mom and Dad rapidly vocalizing together. While this somewhat resembles the 'solicitation' spectrogram, the vocal pulses are a little farther apart and higher. Personally, I think that 'Mom solicits Dad' most closely resembles copulation. Is she vocalizing the 'music of love' to indicate receptivity? Note that the unknown noise in the spectrogram figure prior to this one really closely resembles her solicitation.

Of course, I also had to compare known copulations. Keep in mind that we used different microphones in 2012 than we do now, and they were located in a slightly different position relative to the nest. 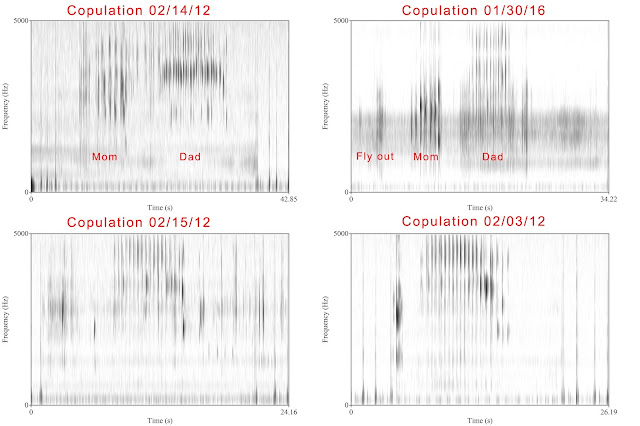 Even given the changes since 2012, these spectrograms look quite similar! It appears that copulatory vocalizations are quite distinct, and spectrograms could be used to help determine whether those early to mid-January vocals are copulatory in nature. After all, we can't always see what Mom and Dad are doing in the upper branches!

While this was more of a thought experiment than anything else, it looks like bald eagles have a little more to say than we realize, even if they aren't singing when they do it. I am looking forward to recording their interactions with eaglets later this year.


I am not a sound recordist. I am sure these spectrograms would benefit from professional equipment, but I have a 64-bit ASUS PC laptop with no special audio equipment whatsoever. The spectrograms were made recording youtube videos via praat in the quietest room of my house, with no one home except myself and two dogs. They were taken from the following videos (note: I can't find the 'was that copulation?' from 2016):