In the late 1940s, biologists began noticing precipitous declines in the populations of many predatory birds. The cause of these declines was not identified until the mid-1960s, at which point several raptor species, including the Peregrine falcon, were facing extinction. DDT, a widespread, extensively-used pesticide, was interfering in eggshell formation. Seemingly healthy birds were laying eggs so thin that they were literally crushed to death by the weight of the incubating adult. How drastic were the effects of DDT? In the early 1940s Joseph Hickey, a Wisconsin biologist, determined that there were more than 200 pairs of Peregrines east of the Mississippi River. But by 1968 there were no Peregrines east of the Mississippi river at all. By the mid-1970s, the population had dwindled to 19 pairs in the western United States.

Project friend Dan Berger was deeply involved in charting the species' decline in the 1950s and early 1960s. Dan worked with Fran Hamerstrom, Aldo Leopold's only female graduate student and a great conservationist in her own right. The falcon-finding team drove slowly along the (then gravel) roads by the Mississippi in an old van that had been retrofitted with a large plywood platform. One team member would lie on it and look for falcons. When a falcon or likely cliff was spotted, the team stopped to explore.

Now we use 11 mm static ropes and a variety of climbing equipment to get to eyries. But none of that existed in the 1950s. The team purchased hemp rope from hardware stores and used it to build ladders, which they used to access nests hundreds of feet off the ground. Their work made it clear that the peregrine falcon was in decline.

The Peregrine’s return to American began with the formation of the prestigious Peregrine Fund at Cornell University. Led by Dr. Cade, the Fund pioneered techniques of captive breeding to produce young peregrines for release. Although many opposed the idea, Dr. Cade persevered and by the mid-1970s began releasing captively-produced peregrines using a falconry technique known as hacking. Following the lead of Dr. Cade, other groups in the United States and around
the world began to breed and reintroduce peregrines.

Bob Anderson became interested in falcon recovery in 1972, when he was working at the Science Museum of Minnesota. He produced his first falcon in 1975. Peregrine falcons were very highly endangered at the time, with only about a dozen pairs left in the wild in the United States, so he began breeding Prairie and Gyr falcons, which were more common. . In the early 1980s, he sold his home in White Bear Lake and all of his 3M stock to begin his breeding program. He often says that successful breeding required a 24x7 commitment. When I met him, he was feeding young peregrines every four hours around the clock.

Very little was known about how to successfully breed falcons and incubate eggs, so the people involved in it were creating a new discipline. They shared information on what did and didn't work, including artificial insemination, incubator conditions, semen collection, breeding birds, and caring for young. Eggs were measured to determine weight and measure water loss. Bob was checking the egg to assure incubator humidity was optimal for hatch. With only a handful of peregrine falcons left, any loss was a big one.

Young falcons were released using a technique called hacking, developed by falconers to improve the hunting and flying skills of falcons raised in captivity. Young birds are released from a hack box, which provides some shelter for them. Since the falcons don’t have the hunting skills they need to provide for themselves, food is put out on a hack board. As the young falcons become proficient hunters and flyers, they eat less of the food provided at the hack board, and feeding eventually becomes unnecessary. This mimics the care that parents provide in the wild.

In falconry, the birds are re-trapped. Since the goal in this case was release, none of the birds were re-trapped. All of the birds we watch in the midwest today are the descendants of captively-bred and released falcons. Without the people who bred them for release, we wouldn’t have falcons to watch in the wild. While many of the people who worked in falcon recovery were academic, others were enthusiasts who believed they could recover the species through hard work and diligent care. Working together - and a lot of people from all walks of life worked to recover the falcon - they did!


Very early releases in Minnesota and Wisconsin were done in wild places. There were attempts – some successful and others not – to hack birds at Maiden Rock and a nameless bluff just south of Nelson, Wisconsin, and at Weaver Dunes in Minnesota. Following a failed attempt at Weaver Dunes, it was decided that all releases would be done in the city.

This is MF-1. Produced by Bob Anderson in 1985 for the Minnesota Falconer’s Association, in 1987 she became the first bird to return mid-continent and breed in the wild. She nested on the Multi-Foods tower in Minneapolis, MN from 1987 to 1994.  He attributes his production success to good breeding stock. The issue of breeding stock was somewhat controversial. Since the original population was almost gone, it had to be recovered from a variety of subspecies, including some that had never nested in the area. Bob acquired breeding stock that was as close to the original anatum as he could get, since he believed they were more likely to survive.

In 1989, an employee and falconer named Paul Simonette reported a falcon at Xcel Energy's Allen S. King plant. Bob verified the report and approached Xcel Energy about putting a falcon nest box on the stack, at the 400’ level (ring two). They agreed and the Utility-Peregrine Program was off and running.

Peregrine falcons provide wonderful organic pigeon control, and the company quickly became interested in boxes at their other facilities. They were joined by many other power companies, including Minnesota Power and Light, Dairyland Electric Cooperative, and Alliant Energy. Since 1989, over 1,000 falcons have been produced from power plants ranging from MPL in Cohasset, MN near the headwaters of the Mississippi river, down through the  Portage de Sioux Power Plant in St Charles County, MO. Power companies also played a crucial role in returning the Peregrine falcon to the wild, and especially to the Mississippi river valley.

In the mid-1990s, Bob started to wonder why peregrine falcons weren't returning to historical cliff eyries. We witnessed falcons fighting to the death over nest boxes not far from historic eyries that were home to the original population. Why weren’t they using the cliffs?

Bob began to think that the falcons were imprinting to buildings. He proposed a series of cliff-based releases to address the problem. It was 1996 and the idea was controversial. Only 55 falcons had been produced in the wild in Minnesota, Iowa, and Wisconsin, and the species was still quite endangered. Pat Schlarbaum from the Iowa DNR was very interested in Bob’s hacking proposal, so Bob sold his place in Hugo, Minnesota and moved to Iowa to breed and hack falcons.

Bob and several friends and Project members, including John Dingley and Dave Kester, built a special eyrie on the side of his house in which to raise the captively-bred falcons for release. The eyrie was built to resemble a cave and looked out on a natural landscape. The young falcons were raised in this chamber with as a little human interaction as possible until they were ready for release.

After an initial test release in Bluffton, Iowa, it was time to work on the Big River. Bob chose Hanging Rock in Effigy Mounds National Monument because it met all of his criteria. It was along the Mississippi river, highly visible, and in a region that contained several historic eyries. However, it wasn’t in his back yard. We hacked falcons from Effigy Mounds National Monument in 1998 and 1999. It was an arduous process that required a 100-mile round trip and three-mile mosquito-infested hike along a muddy, narrow trail every day, for over 40 days each season. The young falcons were fed and counted every day.

I returned to Effigy Mounds in 2010 and hiked out to Hanging Rock. The trail is a lot nicer now. 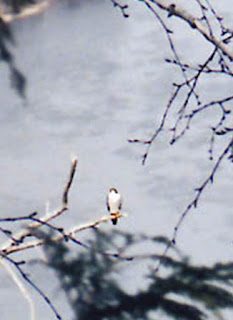 Return to the Cliffs!

In the spring of 2000, Bob learned that one of the falcons we had hacked at Effigy Mounds had been spotted on Queen’s Bluff, a historic eyrie south of Winona, Minnesota. He was thrilled! Our experiment had been a success. Although we’ve now seen falcons from buildings go to cliffs, and falcons from cliffs go to buildings, crossover did not begin until we created cliff-imprinted falcons. By hacking falcons from cliffs, we’d created falcons who were programmed to return to them. Other falcons would follow.

This photograph shows the female perched on a snag. Bob and I hiked up the back of Queen’s Bluff when I was four months pregnant with my son, who is now 12 years old.

The returned population of peregrine falcons is probably the most documented the world has ever known. Every spring we work out a banding schedule, load up gear, and head out to power plants, stackhouses, water towers, buildings, and cliffs. In 1987, two peregrine falcons were produced at one site. This year, we will be banding at roughly 40 sites, including power plants, water towers, stack houses, and cliffs. We climb, rappel, and scramble like crazy to get all of the work done. Because of falcon banders, we have a life history on every bird we can identify that stretches back to the founding population. Organizations that band falcons in the midwest include the Raptor Resource Project, the Midwest Peregrine Falcon Society (who also maintains a wonderful database), and the Wisconsin Peregrine Society.

The peregrine falcon was removed from the federal Endangered Species List in 1999. Its recovery was a true success story, since it showed that dedicated, passionate people could make a difference for the better. However, other species are still in need of our help. Visit the Fish and Wildlife Service Endangered Species Day website for more information, or check out this map (thanks, Nora H!).

We can make a difference!


We stand on the shoulders of giants. I would like to encourage everyone to learn more about two relatively unsung American conservation heroes, Fram Hamerstrom and Althea R. Sherman  (I would be happy to see posts about conservation heroes everywhere in the comments). They made a difference. You can too!