The Decorah Eagles Have Surprised Us With A New Nest!

Mom and Dad are surprising us again.  We have noticed in recent weeks that they seem to be building an alternate nest in the neighborhood.  This is not unusual for bald eagles, but it is new for Decorah. 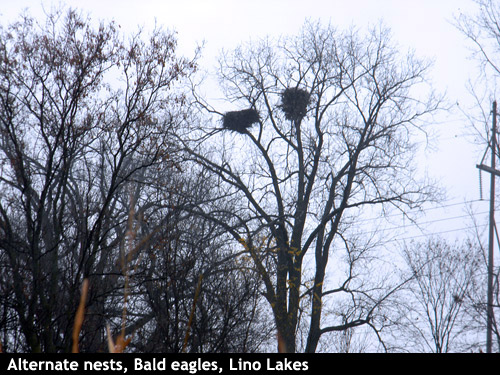 The two bald eagle nests in the photograph above are located roughly 500 feet away from one of Minnesota's busiest interstate highways. The nest at the left was the first nest built by the resident bald eagles, who raised at least eight clutches before deciding to build a new nest in the same tree. I watched them raise young in the lower nest last year, observing in fits and starts as I drove by or sat immobilized in traffic. But I wasn't able to watch them build their new alternate nest, located above and to the right of the original nest, so I'm not sure exactly when they started.  I've seen eagles sitting in and perching by the alternate nest this fall, and I'm pretty sure the female will lay eggs in it come late winter.

Bald eagles build the largest nests of any North  American bird (Stalmaster 1987). So why would they invest the time and energy to build a new nest when the old one remains perfectly serviceable as far as we can tell?  Several hypotheses have been proposed to explain it:

Although we haven't seen it in Decorah before, multiple nest building is a relatively common activity: in most but not all instances bald eagles will have more than one nest in their breeding territory. In one study of 924 territories, eagles were found to have an average of 1.5 nests in their breeding area. In another study of 318 territories, 45% of eagles had two nests or more (Stalmaster, 1987). Eagle nests can be classified as active (shows or showed evidence of breeding by bald eagles during the current or most recent nesting season), alternate (intact or partially intact and used by bald eagles at any time during the past five nesting seasons, but was not used during the current or most recent nesting season), or abandoned (inactive through six or more consecutive nesting seasons). It takes six years for a nest to go from 'alternate' to 'abandoned', since last year's alternate nest might become this year's occupied nest. Why? Only the eagles know for sure.
It is interesting to us that, like the bald eagles in Lino Lakes, the Decorah eagles occupied a single nest for several years before beginning an  alternate. The new nest in their territory is located nearer the trout hatchery, roughly 300-500 feet from their current nest near the woodshed. We don't know at this point which nest they will occupy next spring. Bob did find a dead buck beneath the foot of the 'alternate' tree, which could have played a role in their decision to choose this particular location. But we don't know that for sure.
Here's a peek at the alternate nest (photo by Jim Womeldorf): 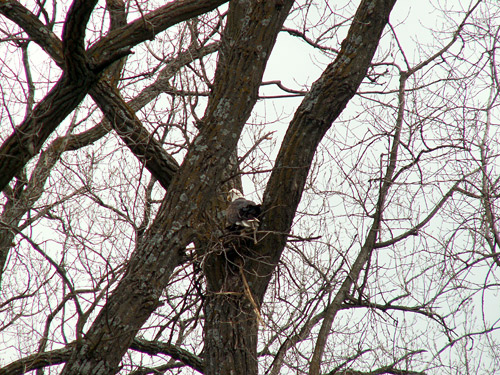 If the eagles do adopt the new nest:

A few things to ponder:
We would really like Mom and Dad to use the nest they have occupied for so long, but we cannot and will not interfere if they decide to use the new nest. As we said in an earlier post on intervention, their lives are a gift we have been privileged to share. We can only hope we'll get another chance in 2013.
Stay tuned and we'll keep everyone updated as the situation develops!

Things that helped me write and learn about this:
Note: I got an email from Nancie Klebba in Lino Lakes. She says:

I spoke with a few people on the board that live on the lake and the City's environmental coordinator and they believe the nest has been on Peltier since about 1993 or 1994.

Marty the environmental coordinator said he would check back to see if he could find the exact date.  He  also said the old nest has not been used the last few years.