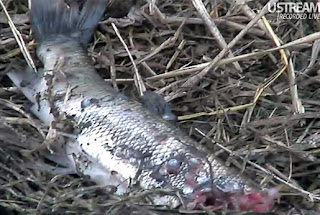 Bob took a turn operating the controls at the Bald eagle camera this morning. He was fascinated by Dad, who brought in three suckers in one hour. Suckerfish are 'rough' fish: generally considered undesirable by humans, they have large scales, fleshy lips, and a 'sucker' mouth that is wonderful for attaching to rocks and scouring river bottoms for food. They spawn in shallow water during the spring, when water temperatures reach between 47 and 60 degrees Fahrenheit. The Iowa DNR tells us that males move upstream in large schools, congregating and defending spawning territories that contain gravel riffles and rubble shoals. While suckers are spawning, eagles are raising a family. Suckers make easy prey: they are relatively exposed, there are a lot of them, they congregate in one area, and they don't leave until spawning is done. "Think about it," Bob said. "We are watching them eat food they evolved with over eons."

Bald eagles have several excellent adaptations for fishing. An eagle's powerful toes, locking talons, and spicules - tiny projections on the bottom of its feet - help it grasp and hold slippery fish, as do the serrations on the roof of its mouth. The black pigment on its wing feathers strengthens them against breakage when it dives into the water. Its nictitating membrane and the boney ridge over its eyes - so noticeable in Mom - helps protect its eyes from sunlight and reduces glare. Bald eagles eat a wide variety of prey, but they are fishers par excellence.

So how old are Bald eagles as a species? Birds begin to appear in the fossil record between 144 and 66 million years ago. These ancestral birds gradually diverged into separate species. Kites, the ancestors of today's Acciptiridae, emerged tens of millions of years ago. Like modern eagles (but not all Acciptiridae) they are believed to have scavenged and hunted fish. The first eagles descended from kites roughly 36 million years ago, and the earliest known fossil remains that closely resemble the bald eagle date back to about a million years ago.

Plio-pleistocene Bald eagles in North America might have shared the landscape with mammoths, dolichohippine horses, camelops, glyptotherium, terror birds, and stegomastodon, as well as more familiar bats, birds, rodents, and fish. Did they build the same kinds of nests? Did they raise their young the same way? Did eagles feed on suckerfish even back then? We don't know: birds don't preserve very well. Still, the thought that Bald eagles flew over an ice-age North America gives me the shivers. So much of what was is gone now, but eagles and sucker fish are still with us.

Fast-forward to a shallow stream 15,000 years ago. Suckers are making their way upstream to spawn. Suddenly, an eagle swoops down and hooks one to bring to its waiting young, who are clamoring hungrily in the nest above. Dad has food. His legacy will survive into a future he can't imagine.

Things that helped me learn and write about this topic:
It was fun to read about plio-pleistocene life forms. It reminded me of very loved books from my childhood that I haven't thought about in ages: brightly colored children's science books about the ice age with fantastic illustrations of mammoths, saber-tooth tigers, and so much more. What a treat to think of them again!
Posted by Amy Ries at 2:39 PM